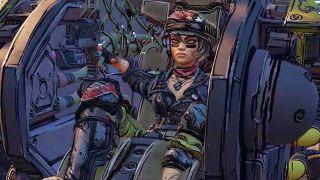 The Borderlands 3 gameplay reveal was exciting - we picked out 23 things worth geeking out about in our own Borderlands 3 preview - and you could tell that Gearbox boss Randy Pitchford was excited too. Maybe a little too excited, as that thing he said about Borderlands 3 microtransactions not existing is untrue by all but the most narrow definitions.

Borderlands 3 creative director Paul Sage clarified in an interview with PC Gamer that there will, in fact, be some of that nonsense - but probably not the kind you're dreading. Rather than paying for loot boxes full of powerful gear, players will be able to buy cosmetic items like skins, heads, and auxiliary equipment. Borderlands 3 will also receive the usual assortment of post-launch campaign expansion DLC, just in case you classify that as a microtransaction too (modern video game terminology is weird).

"When we say 'no microtransactions,' what we're really trying to say is that we're not trying to nickel and dime people," producer Chris Brock further clarified to Games Industry. "We'll probably make content after launch that we will sell, but we also don't intend to take what Borderlands was and then chop it up into chunks and sell it."

Come on guys - shitty clickbait headline. Literally seconds before I said that, I made it very clear we’re going to do more cosmetic stuff like we did in Borderlands 2. You know I was talking about premium currency and loot boxes kind of stuff NOT being in our game.May 1, 2019

To be clear, I don't think Pitchford was trying to lie on stage about Borderlands 3 microtransactions. He just got too excited. He thought what he said was clear - that these things will be microtransactions and these other things won't - but it wasn't. At least it's sorted out now, with plenty of time to go before the game arrives in September.

For more meta weirdness, check out Borderlands 3's sadistic influencer villains, and watch our video guide to 20 things you should know about the game.