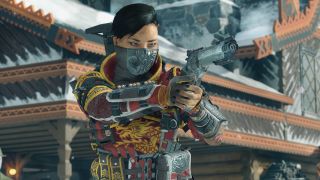 UPDATE: Split-screen is coming back to Blackout on July 9, according to Kotaku. Treyarch has clarified what caused the issue in the first place: "Black Ops 4’s June 25th game update introduced a stability issue only for split-screen players in Quads, Duos, and Hot Pursuit modes in Blackout, and the feature was temporarily disabled while the team investigated a solution. A fix is currently planned for the next major game update on July 9th, which should restore split-screen for couch co-op players in all Blackout modes. This fix required some additional code changes, and as such, couldn’t be hotfixed sooner." So, there you have it - you'll be able to play couch co-op again soon!

Treyarch has temporarily disabled split-screen in Call of Duty: Black Ops 4 Blackout, the game's battle royale mode, but so far it hasn't been specified what particular issues the developers are investigating. In a Reddit post user FoxhoundFPS reports that they've "reached out to the team and was informed that we have temporarily disabled split-screen as we evaluate some known issues. We'll share updates in the future after investigating further." After being pressed for more information, all they had to say was that split-screen is "currently disabled and under investigation/evaluation."

According to players split-screen in Blackout has suffered from a handful of glitches for a while, namely the game sometimes freezing when it's being played in split-screen mode, frame rates dropping, or both. So far there's no update on when - or if - the mode will return to Blackout. Apparently you can still play the Alcatraz map in split-screen, but seeing as these complaints have been around since October last year hopefully it won't take long for Treyarch to figure out what's causing the framerate and freezing issues and get split-screen up and running again. Because c'mon, being able to play co-op in the same room as your buddy is one of the best ways to enjoy games. Who doesn't love that callback to the days of LAN parties and old-school split-screen?

If you're looking for another game to play, keep an eye out for the best Amazon Prime Day game deals right here, or look below to watch some of our Call of Duty: Black Ops 4 Blackout tips!