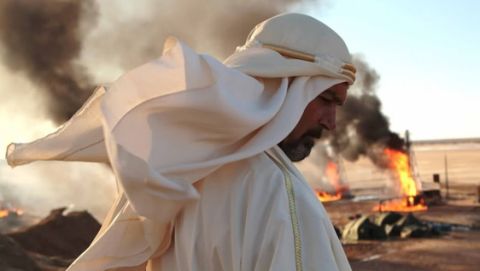 Oil doesn't just make our world go round, it can lead to A-grade cinema too – rich tales of impenetrable macho types tarred by the twin obsessions of greed and power.

Shame then, that Black Gold is the Albertan tar sands to There Will Be Blood ’s finest Saudi crude.

Featuring a trio of Mediterranean-born/ looking Euro-stars getting their sheik on, the film centres on the dawn of the Arabian oil boom, and how it rekindles a bitter war between rival sheiks (Mark Strong, Antonio Banderas) and tests the loyalties of the son (Tahar Rahim) born to the former but raised by the latter.

It isn’t lacking in ambition, intrigue or pithy themes, its exposure of autocratic venality even dovetailing nicely with last year’s Arab Spring.

But not even James Horner’s majestic score can hide the desiccation in too many of the movie’s creative wells: a slight script burdened by clumsy exposition, choppy editing and a skimpy sense of grandeur.

But it’s Rahim’s transition from bespectacled wallflower to unifying crusader that gives Gold its supposed backbone, and while the A Prophet star has some compelling moments with Strong, he’s less convincing as a dynamic leader intent on uniting feuding Bedouin tribes.

Mounting the action in shimmering desert locations, director Jean-Jacques Annaud makes the most of the golden sands, but Black Gold ’s countless camels are the film’s most telling symbol: aloof, uncharismatic, bearing bumps that make for an unsatisfying ride.