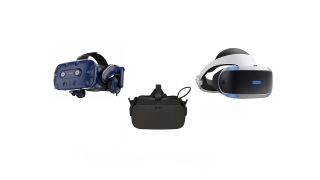 Virtual reality came in like a lion, but that doesn't mean it's going out like a lamb, with the title of best VR headset still very much in contention. After a surge of initial hype and then some quiet while the first gloss of luster faded, VR is starting to establish itself as a mainstream platform, both for games as well as more mainstream applications (like video streaming or medical technologies). We've seen some of the best VR releases in just the past few months, titles like Tetris Effect and AstroBot: Rescue Mission, and the future continues to look promising. While the PlayStation offering, PSVR, has surged ahead on the strength of its library, the other manufacturers haven't been resting on their laurels: Facebook-owned Oculus released the Go, the first properly standalone headset, and announced an even more powerful standalone coming in 2019, the Oculus Quest. HTC, meanwhile, launched its ridiculously comfortable, powerful Vive Pro, the most capable (and expensive) headset we've seen hit the market thus far. And other competitors have also taken on the challenge of VR hardware, with a number of new entries offering ultra-wide fields of view, like StarVR, Pimax 8K, and VRgineer's XTAL.

It's a burgeoning field encompassing some pretty complex technology, so choosing the best VR headset for you can be tricky. Price is always going to be a major consideration, of course, so when debating the 'big three' the PSVR automatically has a leg up, coming in at half or less than the price of its main competition. But price isn't the end all, be all, certainly - performance, comfort, and library are also huge considerations that shouldn't be overlooked. We've gone through and broken down the strengths of each of the top three platforms and explained who each is best suited for and why, in an effort to make sure you get your hands on the very best VR headset for you (or the lucky gamer on your shopping list) this holiday season.

Of course, to power PlayStation's headset, you'll need a PS4, so check out the best PS4 bundle deals happening right now. And both the Vive and the Rift require a solid gaming rig, so also stop by our best gaming PC roundup to find something to power your excursion into these ever-expanding digital realms.

The Rift was the headset that spearheaded the modern virtual reality renaissance. Way back when it was a Kickstarter project that was more promise than substance, the Rift ignited imaginations with visions of a virtual future and demonstrated that consumer-scale VR was possible. Through a slew of prototypes and iterations, huge injections of investment capital and an eventual $2 billion buyout by Facebook, the Rift has become the best destination for serious gaming in VR for those of us without infinite disposable income.

While the early prototypes and first retail versions of the Rift were notably lacking in terms of motion tracking and room scale capabilities, those weaknesses have been fully patched up in the latest iteration of the hardware, and the price has continued to drop. The Rift now comes with room scale functionality and a pair of its excellent touch controllers (easily the best VR controllers available) in its vanilla package, and at less than $400. It also has a massive and constantly expanding library of great games, ranging from multiplayer standouts like Echo Arena to sprawling single-player experiences like Skyrim VR. While Oculus has gone out of its way to say that they’re against exclusivity in VR titles and want VR to be as open and democratic as possible, there are still some excellent games that are only available on their headset, like Insomniac’s Edge of Nowhere or the fantasy action adventure Chronos.

The Rift is midway between the Vive Pro and PSVR in terms of price point (and still $100 cheaper than even the base Vive), but offers a crisp 2160 x 1200 resolution, great roomscale (upgradable to proper 360 degree scale with the purchase of a third sensor) and, most importantly for VR, a 90Hz refresh rate. It’s excellent, proven hardware that’s come out of a long process of tweaking and refinement, and it has the advantage of being attached to PC hardware, meaning the performance ceiling is incredibly high.

While the release of the Oculus Go means there's a less expensive, more mainstream option available in the Oculus family, the library of games is significantly less impressive than its big brother headset. For gamers, the Go is much more likely to be a novelty that gets played with once or twice around the holidays and then ends up consigned to a dusty closet. Its being heavily marketed as a virtual screen room device and, while the standalone facet of its design is really attractive, gamers are better off waiting to see where the Oculus Quest falls in terms of design and performance. We'll keep you updated as more news about the Quest emerges (and whether there's any chance of it unseating the Rift at the top of the VR hill). Watch this space.

Earlier this year, HTC provided an upscale, much improved new model of its Vive headset, the Vive Pro, and created an elite niche for users looking for the very best in virtual reality and willing to pay a significant premium to experience it. If you can afford it, there’s no question that the the Vive Pro is the best current option for top-shelf VR, though you’ll pay nearly double the price of the Rift (and the vanilla Vive looks like a tough sell at a hundred dollars more than Oculus offering).

So what does your nearly $800 get you? The refresh rate remains at a blistering 90hz, like the vanilla Vive and the Rift, but the resolution of the Pro’s stereo screens has been upped to 2880 x 1600. The Vive Pro also takes advantage of HTC’s superior Lighthouse room scale technology. While finding places to mount the sensors high on your walls can be a bit more difficult than with the Rift, whose sensors can sit on any flat surface (and can be angled so that height isn’t a concern), Lighthouse tracking is second to none and the Pro allows for a larger play space. HTC also sells a separate wireless adapter for Vive, which does away with one of the most annoying aspects of room scale, the constant danger of getting tangled up with or tripping over the headsets cables.

The Vive Pro is hands down the best HMD currently available, and while the improvements are certainly noticeable, they’re not revolutionary. Whether they’re worth an additional $400 outlay largely comes down to your budget, and how much you want to be an early adopter of cutting edge VR tech.

Sony’s foray into virtual reality is the most mainstream approach and is priced appropriately. The PlayStation VR HMD only displays at 1920x1080 resolution, which in VR is a fairly significant (though not devastating) downgrade, but it also boasts the fastest refresh rate of the three major headsets at 120hz. This isn’t the headset for tech snobs or those looking for the bleeding edge of virtual reality technology; PSVR is a play to get virtual reality into more homes and introduce it to the console base, loosening the PC technocracy’s stranglehold. Take a look at the best PlayStation VR bundle deals here, if you want to know more.

The major appeal of PSVR is the price and accessibility. Not only is the headset itself the cheapest of the big three, but it’s attached to the PS4, an affordable console even the pro version of which can be had for less than the price a mid-range gaming PC. Plus, PSVR is far and away the easiest of the three options to set up, another critical spoke in the wheel of its mainstream strategy. The only major stumbling block is that Sony’s HMD relies on its aging PlayStation camera and Move Controllers, which means room scale is less impressive and tracking is less accurate than the competition (and the Move controllers are definitely in last place in terms of comfortable grip and ease of use).

That said, PSVR has a great library of games, including some really impressive exclusives like Resident Evil 7 and recent hits like AstroBot: Rescue Mission and Tetris Effect. If you already own a PS4, have an aging PC that’s less than ideal for the demands of virtual reality, or want to experience VR but don’t have a ton of extra cash, it’s a great choice that will give you a ‘full blown’ virtual experience at a wallet-friendly price. And Sony seems committed to supporting it going forward, having already released an updated model with some welcome design and performance improvements.