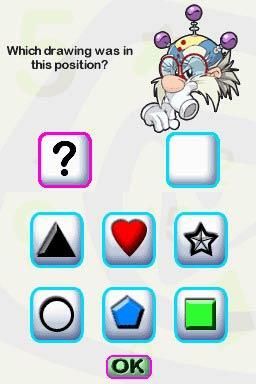 The puzzles and brain teasers of publisher Conspiracy's new brain-boosting game for DS, Best of Tests, are fun to a point. The questions are typical brain teasers involving observation, memory, speed of perception and analysis, and should be familiar to anyone who has ever taken a standardized IQ test.

There are two areas to test: Intelligence, and Memory. Each has 3 categories, Easy, Normal, Difficult; and each category has a sub-category, Short, Medium, Long. One has to play in a specific order: Easy, Short, then Easy, Medium, etc, in order to unlock all the levels. No jumping ahead, no matter how smart you think you are.

While the puzzles are usually entertaining, the fact that the same question can pop up over and over again regardless of a right or wrong answer previously is somewhat annoying, especially when we kept getting it wrong, with no help as to what was the right answer.

Even with the occasional wrong answer, getting through the tests was easy and once we were finished with all the tests - after a mere 4 hours of play time, we were left wondering (a) were we any smarter and (b) was it worth $20? It turns out, the answer to the first question was "yes", because we now knew the answer to the second question was "no". Not unless you're the type who does crosswords in pen and really lives to squeeze the ol' gray matter. But if that's you, there are several better, longer lasting outlets for that urge than this game. And many of them have multiplayer modes as well.