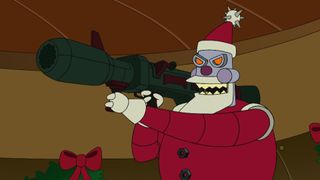 Whether you're a stone-cold Scrooge or you've been wearing a festive sweater since March, Christmas is well and truly with us. It's the perfect time of year to stay indoors, avoid any responsibilities, and binge-watch TV until you develop bedsores in the shape of reindeer. The perfect shows to watch? All those Christmas-themed episodes of your favorite shows. Like Thanksgiving Day specials, Christmas specials let us celebrate the holidays with the people we care about, the fictional characters on TV. Looking for something longer? Here's the best Christmas movies to watch this holiday season.

After getting shot and slipping into a coma Lex is visited by the ghost of his mother. Smallville does It's A Wonderful Life. Luthor's trip into an alternate world is explained through one simple choice: what if he'd told his dad to stick LexCorp?

Like Capra's bittersweet Christmas classic, Lexmas is tinged with both joy and regret. Had he taken a different path, Lex would be married to Lana, have a doting child, and be best buddies with his arch enemy Clark Kent. His vision comes to a grisly end when Lana dies giving birth to their second child; and wakes him from the coma. Lex chooses to stay with his father and not pursue his dreams. It's an interesting choice for such a ruthless villain, to take a lonely life in order to prevent someone else's suffering. That's a bit Christmassy, right?

It's easy to forget that sometimes the most insight can come from places you wouldn't expect. Roswell deals with fish out of water antics as its Earth-bound teenage aliens try to keep their identities secret.

The show's Christmas episode marks a departure from that recipe and ventures into a bolder plotting: what would happen if Max let an innocent die to save his own secret? The answer comes in a dark, compelling method as the father he watches perish - in front of their own kid, by the way - on Christmas Eve haunts him for letting him die. The true sense of giving takes over the rest of the episode, as Max can't help but heal an entire children's ward. No matter what it costs him.

23. Friends, "The One With The Holiday Armadillo"

Friends corners the market on Thanksgiving episodes, but that's not to say its Christmas offerings are shabby in comparison. This season seven entry explores Ross' desire for his son to have a rounded education of the holiday season. As the Gellers are Jewish and Ben knows nothing of his heritage Ross masterminds a cunning plan to make Hanukkah appealing to his son... by inventing Santa's Tex-Mex pal, the holiday armadillo.

It wouldn't be Friends if the whole debacle didn't collapse into a bout of silliness, which it does, as soon as Chandler walks in wearing a Santa costume. But how will Ross make his Christmas-centric boy listen now, with the big red guy in the room? That's not a concern for long, as Joey walks in dressed as Spider-Man.

Asked to imagine a Twilight Zone Christmas special, your mind is probably drawn to quite a sinister place. A part of the psyche that makes us ponder the spooky, weird and downright odd. For a Christmas special, that only spells out one possibility: there's got to be some macabre plot, right? A happy family's joyous festivities wrecked by a dark truth, waiting to be uncovered in the last act.

Well, the show's seasonal offering - Night of the Meek - isn't all that eerie. Sure, it still possesses a narrative twitch that wanders into the supernatural, but it's a cheery supernatural. A recently-fired department store Santa makes a wish to the universe, asking that the meek be allowed to inherit the earth. That doesn't happen, literally, but he is given a special sack that produces specific gifts perfect for each recipient. Pretty cool, eh?

The biggest gift SyFy gave to fans of its mystical artefacts show was the return of agent Myka, who resigned in the previous episode. Secret Santa takes place out of the regular timeline to counter this slight continuity issue, with Pete and Myka journeying to Los Angeles on an investigation concerning a Christmas tree ornament. Its powers fit the theme of the week: while it gives the bearer the chance to make their wishes come true, it also harbours a desire to bring harmony to the world.

Claudia, meanwhile, attempts to bring peace to Artie when she locates his old childhood piano as a Christmas gift... and his estranged father. Not all surprises stem from a centuries-old mythology. Although the original mistletoe - that forces people to smooch - is neat touch.

Chuck's weekly source of conflict takes a double-pronged approach for his Christmas extravaganza. His everyday ruse as an employee of Buy More brings the big guns, literally. After a high-speed pursuit, a disgruntled man crashes his car through the front windows and holds the store hostage.

The whole episode won plaudits for its brilliant gags, that come thick and fast in what's essentially an homage to Die Hard. Chuck's not ripped like John McClane, but he's got the goods where it counts as he refuses to abandon his friends and co-workers when offered an escape route.

The South Park team write an entire episode dedicated to a piece of fecal matter in a red velvet hat, and conclude with a seasonal message of all-encompassing love and understanding. That's the gist of this crude takedown of religious exclusion. Kyle's Jewish heritage comes up short at Christmas when the entire town fails to acknowledge his holiday beliefs for the school play.

Enter: Mr. Hankey, the Christmas Poo. Kyle's brown-loaf pal pops up to bring him friendship at a time of loneliness, a secular mascot who is only seen by those who believe in him. Everything turns out well in the end, after people open their minds, and allow the Christmas poo to enter their hearts.

It takes a certain type of show to pull off a novelty episode. A Christmas-themed one requires either an easily-adaptable premise or a fanbase who simply lap up every broadcast. What makes Millennium a strange choice for the seasonal treatment is that it's neither of those things.

And yet, Omerta wrings the Christmas spirit out of its mobster-monster plot with a twinkle in its eye. There's the two women who appear as angels, who turn out to be supernaturally gifted, driving most of the action. When the focus turns to Frank and his daughter Jordan the real "miracle" happens. Their Christmas getaway is thwarted early on by the case, leaving little time for present buying but enough to realise that family is what's most important.

Christmas Comes But Once A Year is a bit of a tongue-in-cheek episode title for Mad Men, a show centred around a company for which every single day is practically Christmas. So what do you do if over-indulgence is your entire life? Don Draper and his cohorts barely last a moment without puffing on a cig, or necking a generous pour of whiskey, and their seasonal hootenanny ups the ante considerably. It has to. Roger learns that a Lucky Strike rep - who no-one likes - is attending, and the firm desperately needs his continued business.

Twinned with Don's turbulent home life post-divorce, the episode strikes an uneasy balance between appreciating what you have and grasping at what you might lose.

The last place on Earth you'd ever want to spend Christmas is at Briarcliffe asylum. Neither do its patients, to be honest, who have no choice in enduring the holidays at the hands of its deranged nurses and sadistic surgeons.

As expected, the festive spirit is well and truly dampened when Sister Mary Eunice shows mercy to a convicted serial killer Leigh Emerson. Locked up for murdering several people dressed as Santa Claus, he's given back his costume as a gesture of good will, in the hopes that he will feel remorse. A bit of a bizarre act seeing as he's still intent on slashing and stabbing anyone he feels is deserving of death; but hey, at least he uses an ornamental star to do his dirty work.