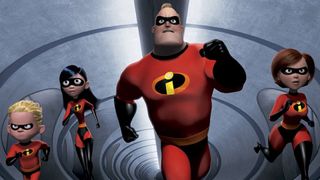 Animation has come a long way since Mickey Mouse's first appearance. Way back then Walt Disney created stories with the sole purpose of keeping the kids entertained. But as time has gone on the entire animation world has changed tack. It's not just about the young 'uns anymore. Mature themes, sophisticated storylines and creepy characters have all emerged in movies, meaning adults can now revel in the joy of cartoons just as much as their children.

This genre now ranges from sinister and shocking, to innocent and childlike, to madcap and fantastical. And, with more movies coming from multiple studios, each with their own approach to developing the animation art form, the animation world is evolving to find fresh ways of telling stories. Want to know more? You're in luck. Here's the top 25 best animated movies.

The movie: Disney's 52nd animation goes full-on CGI and benefits from the presence of Rich Moore in the director's seat - he previously brought knife-sharp wit to The Simpsons and Futurama. Tired of always being the bad guy in games, Ralph does a spot of game-hopping to figure out how he can become the hero. The film, co-written by Frozen's Jennifer Lee. is a loving ode to all things video game, with in-jokes and heart galore.

Only in animation: We see the video game world as it truly is: an animated metropolis of magnificence.

The movie: Dreamworks' two-fingered salute to Disney dominance trashed sacred cows and provided Pixar with its first real competition, especially when it beat Monsters Inc. to the Best Animated Feature Oscar. Mike Myers voices the green-skinned ogre, whose happy swamp-dwelling existence is disturbed by an influx of fairytale characters. He sets out with Donkey (Eddie Murphy's best turn in years) to visit the evil Lord Farquaad and demand he take them back.

Only in animation: A snake and a frog are blown up turned into living balloon animals.

The movie: Taking an important issue that might ordinarily fly over kids' heads, and transforming it into a tale of animated glory is nothing new. Disney's bash at tackling the controversial climate change debate manages to make its point and make it a devilishly fun one. This Polynesian adventure tells of a young girl called Moana whose island is on the verge of collapse. The fish swim away, crops are dire and so there's only one way forward. She journeys to defeat an ancient baddie in order to restore the Earth's true balance! Well, after meeting up with Dwayne Johnson's larger-than-life Maui.

Only in animation:  A giant lava demon. Just sayin'.

The movie: Dancing penguins. Need we say more? Oh, alright then! This cuteness overload from the director who brought you the Mad Max movies (no, really, George Miller made this) follows Elijah Wood's emperor penguin named Mumble. His attempts to lure a mate through song aren't hugely successful - indicated by his name - so he sets about learning how to tap in order to catch the eye of a prospective female. I kid you not.

Only in animation: The dancers in big song and dance routines can be so much better synchronised when you're dealing with cartoon critters.

The movie: Although it may not look like it, Big Hero 6 is a Marvel Comics adaptation. To be fair, though, it's a very loose adaptation. The film's breakout star Baymax - an inflatable medical droid repurposed as an armoured fighting machine - is very different to his comic counterpart. The film, though, is an unexpected delight; a story of teenage friendship with a manga makeover. Think Stand By Me meets Neon Genesis Evangelion (or if that's too obscure a reference, a cooler version of Mighty Morphin Power Rangers). It's funny, emotionally engaging, visually spectacular and packed with charm.

Only in animation: Baymax goes from cuddly Michelin Man to Hulkbuster with rocket hands and you totally buy into it.

The movie: Brad Bird's sensitive adaptation of Ted Hughes' British story relocates to Cold War-era America to provide a 20th century fairytale with real-world insight. It's got a great Spielbergian edge, as a young boy in middle America discovers a robot crash landed in the desert. Naturally, the authorities want to get their mitts on it.

Only in animation: CGI was used to help create the Giant, as it would be in a live-action movie. What sells this film is that everything else is stylized.

The movie: Though it came out at the same time as the similarly-themed MegaMind, it was Despicable Me that won the 'bad guy as the lead' in 2010. And not just because of the loveable Minions, who managed to win over everyone's hearts so much so, they earned their own spin-off movie. Well, they are chucklesome, but it's watching Gru's journey from megalomaniac to a considerate megalomaniac that's the real treat.

Only in animation: Villain Gru (Steve Carell) succeeds in shrinking and stealing the moon.

The movie: Doing away with its usual reliance on A-list voice casting and pop-culture gags, Dreamworks proved it could handle spectacle and story as well as Pixar. With a title that's also a nice description, you sort of know what you're getting with this. A tale set in a distant, faraway land called Berk follows the adventures of hip youngster, Hiccup, who refuses to participate in the tradition of dragon fighting and instead.... yeah, you guessed it, chooses to train a dragon.

Only in animation: Soaring landscapes that - with the help of Coen Brothers' cinematographer Roger Deakins - look better than the real thing.

The movie: There's little point denying that the film inspired by The Snow Queen is a genuine phenomenon. It's officially the biggest-grossing animated film ever made. And it did this without an ounce of cynicism in its running time. This is old-school Disney, a full-blown musical with comedy critters and lovestruck princesses. Thankfully said princesses are a little more kick-ass and proactive than some of their swooning house-cleaning predecessors but there are few of the kind of knowing winks and cultural references that form the backbone of much of the humour in modern family films.

Only in animation: The on-screen realisation of Elsa's ice powers borders on breathtakingly beautiful at times (so much so, you wonder why anybody would want winter to end).

The movie: Pixar proves it can do anything again. A post-apocalyptic neo-silent comedy about a robot who collects trash? No problem. The 'bot in question doesn't say, well anything, but in his happy-go-lucky adventure Pixar discovers one of its most honourable heroes to date. Managing to add in an environmental dig is a bonus.

Only in animation: The stunning depiction of Earth, which is so photo-realistic it's a wonder live-action movies don't give up.