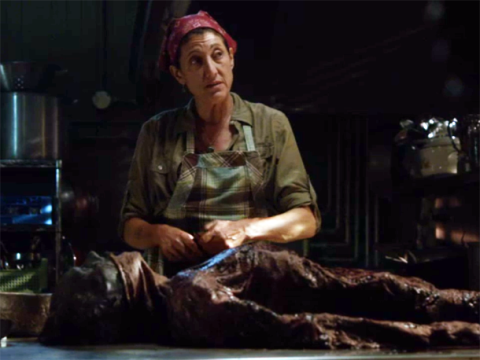 THE ONE WHERE Everything changes – big time.

VERDICT The US version of Being Human has always – inevitably – suffered by being continually compared to the UK original, even though its storylines started to divert from the Whithouse episodes pretty early on. It rapidly became its own thing, and at the start of season three it has already begun to reinvent itself. But where the BBC series reinvented itself by killing off all the main characters and starting again with new monsters in the same roles, the US version has made some rather more fundamental changes.

A quick refresher: Aidan has been “grounded” by Mother (buried alive for daring to oppose her), Sally is lost in Limbo after leaving our world to try to find Nick and Stevie, and Nora has just shot Josh’s sire, Ray.

This opening episode starts with a “15 months later” caption, and our heroes are all happily bantering away in the kitchen; it initially feels like the writers are cheating us, but when it is revealed that the scene is merely Aidan’s imagination, and a way for him to cope with his encroaching insanity after being stuck in a coffin for over a year, it feels like the show is truly back.

Our first clue that something big has happened – that there has been a change in the status quo – happens in a scene at the hospital where Josh and Nora still work. A vampire has been brought in. He’s sick, dying. Josh recognises him for what he is, and takes him to a side room to interrogate him about Aidan’s whereabouts. He doesn’t know, and the illness that devours him has apparently swept through the vampire population, killing most of them. But the bigger revelation comes when Nora enters the room and the vampire reacts to her, warning Josh to keep away from werewolf scum. Has Josh somehow regained his humanity? Apparently so. The flashback scene in which Nora shoots and wounds Ray leaving Josh to kill him is effectively done, and it’s a shock to see the brutality that Josh displays when he sees Nora being attacked. Josh killing his sire, means that Josh is now fully human, again, but Nora is still a wolf. This throws the entire dynamic of the show off-centre. It’s brave of the writers to take what worked and change it to try something new, rather than rehashing the same old concepts.

Josh and Nora’s search for a medium to help them find a way to bring Sally back is handled in the off-hand, casual way it needs, and provides one of the episode’s few light moments, and when they find a witch who tells them she’ll need $2,000 and the heart of someone they’ve killed to bring Sally back, Josh digs up Ray and takes his heart. They return with it only to discover that the witch needs Sally’s body, too – if she’s to bring Sally back, it’ll be inside her reanimated corpse and not as a ghost. Wow! Cue another grave-digging scene with our favourite former-werewolf.

Aidan’s rescue by an amateur vampire-hunter could so easily have been played for laughs, but laughs are in somewhat short supply in this episode. The hunter kidnaps him and bleeds him. A human flu virus has been killing the vampires and they’re willing to pay top dollar for Aidan’s pure blood. Atlee’s rescue of Aidan makes us think he’ll be safe, but it isn’t long before we discover that Atlee wants to bleed him for the same reasons. You can never trust a vampire.

Meanwhile in Limbo, Sally has been running every night with Nick and Stevie to a representation of her front door, hoping that one day it will be open with Josh and Aidan on the other side. Every night the same thing. Every night, disappointment. The scene in which she – yet again – cuts Stevie down from a noose hanging outside a ghostly representation of his family’s house (even though he committed suicide with pills) helps to re-establish the show as one which is not afraid to make its characters suffer.

When the witch uses magic to reanimate the body, Sally finds her door open again, and she ushers Nick and Stevie through before joining them. The scene where her body wakes and we discover that all three ghosts have now taken up residency is sufficiently chilling.

Aidan might be ever-so-slightly insane, Josh is human – that’s gotta put stress on his relationship with Nora – and Sally is now legion. Now that’s how you stir things up!

Will Aidan’s madness last? Will Josh’s guilt at being human make him force Nora to infect him again? Will Sally’s ghostly pals be back-seat passengers, or take turns driving the vehicle (and wouldn’t that make the character fun to play!)? How can you not tune in for the next episode after all that?

BEST LINE
Josh: “We’re bringing Sally back.”
Nora: “As what?”