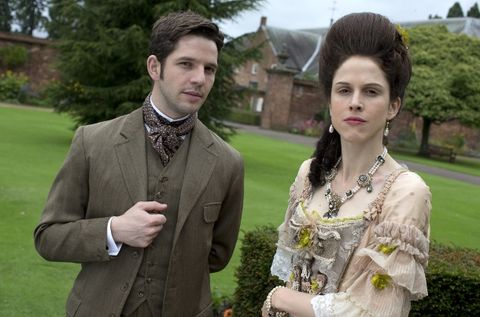 THE ONE WHERE We meet a werewolf weatherman and a potty-mouthed Regency ghost… and Hal kills again.

VERDICT One of the things we’re going to miss most about Being Human (now now, don’t blub, people. Hold it together… at least until you’ve read to the end of this page) are its guest star roles, which have always been one of its greatest strengths. “Pie And Prejudice” really spoils us, with a double-whammy of hilarious new characters. Both Julian Barratt and Amanda Hale are both excellent in their respective parts.

If we have one slight reservation, it’s that Barratt’s washed-up weatherman Larry Chrysler reminds of a certain other comic character, formerly a successful TV presenter, who’s now on his uppers. Worked out who we mean yet? Aha! There you go. To be fair, that might simply be a matter of the setting. If it wasn’t for the fact that we first encounter Larry in a hotel, maybe those Alan Partridge bells wouldn’t have started tolling quite so heavily. And the character remains a hilarious creation.

The same is true of Lady Mary. Initially, it looks like we’re in for a ghostly version of Ladette To Lad , so the moment where Mary relaxes and starts cursing like a docker is a brilliant rug-pull (although it's topped by the scene where you think Rook is ringing The Samaritans, but it actually turns out to be a sex chat line!) Thanks to her, this is the probably the sweariest episode in Being Human ’s history. It’s the effect she has on Hal which is most memorable: the face he pulls as she says, “Headfuck!” is simply priceless (as is his utter horror at having to say the word “masturbation”).

Yet it’s also an episode which is an excellent showcase for the regulars. We know from the evidence of series four that Michael Socha is a comedy genius, and Jamie Matheson’s script offers him plenty of opportunities to prove that again. Tom’s naïve hero worship of Larry is incredibly sweet, and his, “There’s a new player in town” speech is hilarious.

And even with all this hilarity, there’s still room for heart-rending emotion, and a massive shock, as Hal and Tom’s unlikely bromance comes to the fore again. Hal’s speech about Tom’s personal qualities fair brings a tear to the eye. Then there’s his murder of Larry. He fact that it happens at all is shocking enough – Larry may be chauvinist and a user, but he doesn’t deserve death – but what makes it doubly appalling is the fact that his description of Alex and Tom as “a slag and a retard” is what finally pushes Hal over the edge, because throughout its five series, Being Human has always been a show about the power of friendship. The fact that it might be the very strength of Hal’s bond with his housemates that causes everything to fall apart is a horrible irony.

SPECULATION What next for Hal? It’s hard to see how he comes back from murdering a werewolf in cold blood. The truth will out – and when it does, will Alex and Tom be able to forgive him? He’s phoned Rook to arrange the disposal of Larry’s corpse, but surely Rook will want something in return? Might Hal agree to Rook’s proposal that he take over the leadership of the vampire community?

LOCATION LOCATION Lady Mary’s home is 17th century mansion Tredegar House, which has been used many, many times in Doctor Who .

LARRY’S LIBRARYAs you probably guessed, sadly, neither Chicken Soup For The Investment Banker or I Want All The Pie: Good Guys Go Hungry are real books. And neither is The Perfect Storm: Michael Fish - The Autobiography .

The track which plays when we first see the stately home is “M79” by Vampire Weekend.

We hear “Money (That’s What I Want)” by The Flying Lizards after Tom delivers his “new player in town” speech to Hal.

BEST LINE Mary to Hal: "Do you ever listen to yourself? It’s like the shipping forecast took a shit in your ear.”