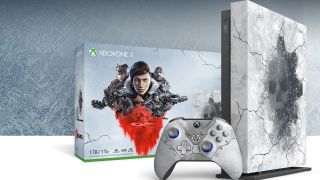 With only a month until Early Access to Gears 5 is available, we now know the exclusive swag will look like. Xbox announced that its Limited Edition Xbox One X console, as well as a handful of accessories, are now available for preorder.

The trailer for the Gears 5 Limited Edition Bundle features the voice of famed Gears of War hero Dominic "Dom" Santiago over the visual of Gears 5's protagonist, Kait Diaz, an outsider descended from Locusts. Dom tells Kait that there's a place up north that might provide answers to her ancestry before the camera pans to a layer of cracking ice. Under the ice is the iconic Gears crimson omen logo, now an icy white. That new logo is on the Limited Edition Xbox One X console, along with a gold Locust symbol emblazoned across the back, a reference to the necklace Kait wears.

The console looks incredibly cool, featuring "never-before-seen dark translucent casing and laser-etched cracks" to mimic a frozen body of water, with a snowy texture dusted across it. It's the first Limited Edition Xbox One X released since the Project Scorpio model back in 2017. If you buy the Limited Edition bundle ($499), you'll also get a custom Kait Diaz-inspired wireless Xbox One controller, game downloads of the ultimate editions of Gears 5 and the original Gears of Wars, downloads for Gears of War 2-4, one month memberships to Xbox Live Gold and Xbox Game Pass, and exclusive Ice Kait and Ice Jack skins.

If you don't want an incredibly cool limited edition console, you've got other options. There's a standard Xbox One X bundle ($499) which has the exact same offerings but without the ultimate edition of Gears 5 and with a regular black Xbox One X, and the Xbox One S bundle ($299). The Kait Diaz controller can be bought separately for $74.99 along with a limited edition Kait Diaz Xbox Pro charging stand from Controller Gear for $49.99.

But ladies and locusts, that's not all. Razer has produced a custom Gears 5 headset, as well as the world's first wireless keyboard and mouse exclusively for use with an Xbox One, the Razer Turret and Razer Thresher. Pricing is currently unavailable for the headset, but the keyboard and mouse will be sold together for $299. And if you're running out of storage space, there's a 2TB Seagate Game Drive Gears 5 Special Edition (there's apparently a 5TB one available exclusively at GameStop).

Gears 5 will be available for Xbox One and PC on September 10.

If you're after some Gears gossip then check out how a new Gears of War 3 Easter egg was discovered five years later.