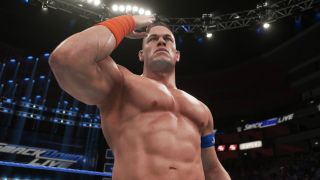 The latest round of RKOs, DDTs and Styles Clashes is imminent – and the complete WWE 2K18 roster has finally been revealed by co-developers Yuke's and Visual Concepts. Reigning WWE Champion Jinder Mahal makes his return, while debutants include 205 Live posse TJP, Rich Swann, Cedric Alexander and Noam Dar, and NXT tag-teams Authors Of Pain, Sanity, and TM-61.

Below you'll find profiles of every single wrestler on the roster, including DLC additions such as the Hardy Boyz, Elias, and Ruby Riot. On with the big show…

Smackdown's singing sensation (one of those words may be a slight embellishment) looked doomed when Vaudevillains tag partner Simon Gotch departed WWE, but instead English picked up surprise summer victories over Sami Zayn and Tye Dillinger. While the Orlando man prospers, Gotch is unsurprisingly axed from 2K18.

Across the entirety of 2017, no wrestler had a better three-day period than Tozawa from 14-16 August. On Monday night, he claimed the Cruiserweight Championship for the first time in a Raw triumph over Neville; and on Wednesday, he was confirmed as a debutant on the WWE 2K18 roster. Tidy work all-round.

A-Train, Lord Tensai, Prince Albert: however you know Matt Bloom best, you may not be aware that he's now a fixture of WWE behind the scenes – as head trainer at WWE's Performance Center in Orlando, Florida. That means he plays a major role in WWE 2K18's MyCareer mode, and is playable in his Albert guise in all other modes, too.

Dutchman Tom Budgen – or, as he was known pre-WWE, Tommy End, looks set for a big future in the company with his goth-influenced character and unique kickboxing style. He had the best match at NXT Takeover Brooklyn 3 opposite Hideo Itami, and is a strong bet for a main roster call up next spring, immediately following WrestleMania 34.

It's been a remarkably successful year for Bliss, following up her reign at the top of Smackdown's female division with two separate stints as Raw Women's Champion. Four Horsewomen Bayley, Charlotte, Sasha Banks and Becky Lynch have grabbed countless headlines over the past 12 months, but Alexa has arguably outperformed them all.

First seen on WWE screens as Edge and Vickie Guerrero's duplicitous wedding planner, Fox has spent much of 2017 playing valet and/or girlfriend to Noam Dar – who, by the way, makes his series debut in 2K18. The game provides a chance to catapult her back into the squared circle, and a first title reign in seven years. (Fox held the Divas championship for one month in 2010.)

WCW's Madusa etched her name into wrestling history when she showed up on Nitro while still the reigning WWF Women's Champion – and dropped the belt in a trash can. That made her persona non grata for more than 20 years, but all was forgiven ahead of her Hall Of Fame induction in 2015, and this is her third 2K series appearance in a row.

Andre's was one of two statues that could be spotted in the 2K18 cover reveal vid, which suggested he'd be back for another WWE game appearance. Sure enough, he featured among the first batch of official names revealed in mid-August, and a dream bout with fellow walking megalodon Braun Strowman now beckons.

After featuring as a DLC character for WWE 2K17, Crews gets upgraded to on-disc this year – where hopefully he's given a chance to shine that hasn't been offered in real WWE. A switch to Raw and alignment with Titus O'Neil has seen him relegated to B-show Main Event or not used at all, which is incredible to anyone who followed his pre-WWE career as Uhaa Nation.