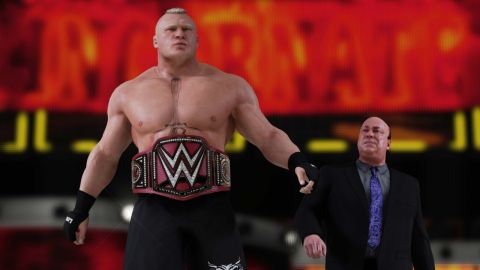 Exceptional when it all works, but for the third year running launch-day gremlins prohibit an even greater score.

The very best wrestling matches take you on an emotional journey from triumph to despair and back, to the point that you forget everything happening in front of you is choreographed. Ricky Steamboat vs Randy Savage. Bret Hart vs Mr Perfect. The Undertaker vs Shawn Michaels. It’s perhaps fitting, then, that WWE 2K18 runs the full spectrum of emotions in every play session. The only drawback? The ‘despair’ element isn’t as deliberate, or deserving of sympathy, as when encouraged by Steamboat against Savage, or Daniel Bryan vs Triple H.

This is a wonderful wrestling sim, but one always liable to blindside you with an unexpected heel turn. Take eight-man, or woman, bouts. For the first time since 2001’s Smackdown! Just Bring It on PS2, you’re able to play out octagonal onslaughts in both Battle Royal and four-on-four tag-team flavours. Sporadically it’s a brilliant, and quite literal, game-changer, but crippling lag often renders reversals impossible, as the action slows down to appear more 19th Century flip book than contemporary videogame. Digital Vince giveth, and digital Vince taketh away.

When the frame rate does hold up – i.e. any time there are four or fewer wrestlers competing – it’s hard to find fault with the in-ring grappling. Those returning from 2K17 are greeted by a strong whiff of the familiar, but this is no lazy annual retread; the solid, sim-heavy feel that’s become 2K’s calling card is fleshed out by myriad subtle additions.

Wrestlers show greater awareness when felled near the ropes, often letting momentum carry them to the floor to grab a breather, or settling on the apron in order to drag themselves up rung-by-rung. Flash eliminations transform Battle Royals and Royal Rumbles - so a colossus like Braun Strowman can sling people out without resorting to mini-games - while floored wrestlers in those match types, and tag bouts, remain down while their health refills. That system worked brilliantly in Triple Threats and Fatal Four-Ways last year, and its use in other match types is a masterstroke - at last preventing wrestlers from leaping back into the ring to make a save when they’ve only moments before tagged out through exhaustion.

It’s not only in the squared circle that the mix of knuckle sandwiches, Oklahoma rolls and Boston crab-cakes excels. Falls Count Anywhere matches offer an expanded, free-roaming backstage area with more than a dozen interactive points: dressing-room TV, parking-lot supercar, vending machine, etc. In these scenarios the simulation element disappears completely the moment you chuck an opponent off the production truck for the first time, but there’s no denying the sense of fun. For those raised amid the Hardcore Championship era, it’ll mean an immediate trip to Community Creations (where the servers, and search results, are much more reliable thus far) to nab Hardcore Holly, Raven and Al Snow.

Just how good is the WWE 2K18 roster?

Even without Community Creations, 2K18’s greatest strength is its roster. This is, without debate, the greatest line-up of past and present grapplers ever to feature in a wrestling game: over 200 once you factor in alternate gimmicks (e.g. Godfather/Papa Shango) and upcoming DLC. Every boda fide legend save for Hulk Hogan - and rightly so, after his 2015 transgressions - is present, but it’s the modern-day depth which really impresses. Nowhere is this more evident that in the case of TM-61: an Australian tag-team who’ve only appeared on WWE TV 11 times, yet have their likenesses, entrances and moves included. That’s exceptional attention to detail.

This hulking collective mass of muscle, athleticism and fury is best used in Universe mode, where roster members can be placed on shows and in rivalries as you see fit. An annual series highlight for me is initially splitting the array of available superstars across Raw, Smackdown, NXT and my own Legends show, complemented smartly this year by new cruiserweight broadcast 205 Live. Universe is upgraded by AI-generated potential rivalries, which simmer in the background as your existing feuds play out, plus a high increase in the number of relevant cut-scenes, and a cool ‘Power Ranking’ system.

Again, though, these improvements come with a caveat. In a week’s play I’ve encountered a stream of immersion-killing bugs, from my wrestler being unable to get up from the very first move in a Last Man Standing Match - it was Tatanka, but even he’s not that awful - to two complete crashes of the game. Promos set by the AI can’t be deleted, and while regular computer-controlled run-ins during entrances are a neat add, they’re currently happening in almost every match. I expect all of these issues to be patched, and for any other series would offer the benefit of the doubt, but with WWE 2K we’ve been here before 12, and 24, months ago.

A question of questionable priorities

It feels like Universe is once more an afterthought compared to MyCareer and the new Road To Glory mode. Both of those modes add some early intrigue – the former with a more streamlined story that still offers freedom via the ability to engage with wrestlers backstage, Road To Glory via an addictive-if-cheeky lootbox unlock model which opens up new moves for your created grappler – but neither should be taking priority over Universe. After all: most WWE fans buy the WWE game to play as WWE wrestlers, not fictional, blow-up-doll reincarnations of themselves.

This is an agonisingly difficult game to score. With genuinely incredible create-a-wrestler options bolstering a mammoth roster, I know I’ll play it relentlessly until this time next year, if and when those Universe issues are fixed. But there should be no ‘if and when’, particularly when its predecessor launched hosting similar bugs. As such, there has to be an impact on the final score, which otherwise would be pushing towards five-star territory.

Confident and brimming with ability, WWE 2K18 repeatedly teases being the greatest wrestler ever. Yet every time you’re tempted to utter the words ‘Hall Of Fame’, it mercilessly strikes with an RKO outta nowhere.

Exceptional when it all works, but for the third year running launch-day gremlins prohibit an even greater score.