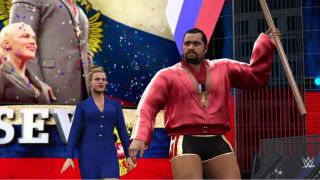 WWE 2K17’s on-disc roster of 132 characters is the most impressive ever seen in the series once known as Smackdown – if you don’t believe us, be sure to check out GR+’s comprehensive roster gallery. But 2K is already teasing more names to come as DLC: so far only Goldberg, Apollo Crews, Shinsuke Nakamura and Nia Jax have been confirmed as downloadable additions. That’s where we come in.

Ahead are 16 names which would further bolster this year’s line-up, with a few ground rules. I’ve not included those considered persona non grata to WWE such as Hulk Hogan and CM Punk, or 2016 starters with NXT like Austin Aries and Bobby Roode. They’re locks for WWE 2K18. Kurt Angle is also left off given his recent close ties with TNA – although you have to consider him a strong contender to be next year’s pre-order incentive.

With those guidelines out of the way, let’s begin…

As documented in our 9 wrestlers (and one Terminator) shockingly dumped from WWE 2K17 feature, the bruise-delivering Brit has been left off this year’s roster despite offering one of 2K16’s best likenesses. Hopefully DLC amends that oversight.

A long-time series regular in its Smackdown vs Raw days (the above screenshot is from WWE 12), The Miz’s real-life wife returned to WWE TV this year as his onscreen valet – and collectively they’ve formed one of 2016’s most entertaining acts.

Despite a seven year-run with WWE which ended in 2014, Zack Ryder’s former tag partner only ever appeared in one game – as an unlockable character in Smackdown vs Raw 2009. A recent recapture, he’ll hope for better video game luck this time around.

From Zack Ryder’s former tag partner to his current one; Rawley debuted on Smackdown after July’s WWE Draft, immediately reforming the Hype Bros tandem previously seen in NXT. He’d been in developmental since 2012 – more than enough time to be scanned for the game. (CAW by Ghost Of Crow.)

The Samoan-masquerading-as-a-Sumo-wrestler was a disaster as champion in the early ‘90s, yet his power-heavy moveset (and chest-crushing Banzai drop) nonetheless made him one of WWE 2K14’s most fun characters to play as. Seconds, please.

The legendary NJPW junior heavyweight made his one-and-only WWE appearance in August 2015 – an NXT Takeover victory against Tyler Breeze. He’s a long shot, but it's in late autumn that the planning stages for each roster are made, so there’s the vaguest possibility he’s in. (CAW by LigerBomb25.)

Like Hawkins, this long-time jobber returned to WWE this year despite an uninspiring original run – and like Hawkins, it’s probably come too late for him to feature as DLC. But if there were a final pack to come in, say, January? Maybe, just maybe.

A similar deal to Mojo Rawley here: Rhyno only rejoined the main roster in July, but has been lending his experience to the NXT brand for the last two years, and so could easily have been scanned at any point during 2K17’s development. Here’s hoping.