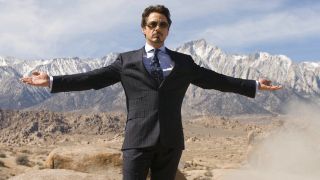 While audiences are still obsessing (or reeling) over the recently released Avengers: Infinity War, the movie that launched it all for Marvel Studios—Iron Man—celebrates its ten-year anniversary this week. It’s hard to imagine a time when there wasn’t at least one MCU movie in theaters, but back in 2008, Marvel was primarily known as a comics company that had to partner with studios to produce films. Some, like Blade, X-Men, and Spider-Man, became huge hits. Others, like Daredevil, Fantastic Four, and Ghost Rider, were mixed bags.

Back then, Marvel still made plenty of sequels, but nothing was connected. It’s easy to lump the first Iron Man in with other superhero films of the era, but it’s important to remember that the movie was seriously groundbreaking. The film was shot on the fly, after having been in development for over a decade, and featured a character that test audiences and focus groups originally believed to be a literal robot—all while starring a questionable lead actor (at the time).

In 2003, Robert Downey Jr. was driving a car filled with drugs when he decided to pull over for a cheeseburger. He went to Burger King, where he ordered “such a disgusting burger … and this big soda,” the actor described to Empire magazine in 2008, “and I thought something really bad was going to happen.” Downey Jr., who had been widely plagued by substance abuse through the late ‘90s and early 2000s, suddenly had a moment of clarity. He realized he hit a new low and decided to throw all his drugs into the ocean that night and get cleaned up.

Fast forward five years, when genius billionaire Tony Stark (played by Downey Jr.) returns to the United States after three months held in captivity. He asks for two things after he steps off the plane: a press conference—so he can announce his intention to shut down the weapons division of Stark Industries—and an American cheeseburger. When Tony emerges from his limo at the press conference, he’s already finished one burger when his bodyguard (“Happy” Hogan, played by director Jon Favreau) hands him a second one, which Tony consumes while walking in. He pulls a third burger from his jacket pocket that he eats while addressing reporters. “A burger, you had to have a burger,” Obadiah Stane (Jeff Bridges) observes as Stark eats.

Audiences watching this scene in the film assumed the cheeseburger sequence was little more than blatant product placement, like Tony Stark’s Audi R8 or his LG VX9400 flip-screen cell phone. They didn’t know Downey Jr.’s night of burgers and drugs, or that the actor credited Burger King with having inadvertently helped to save his life.

To be fair, there was a lot that audiences didn’t know about Iron Man when it first debuted on the big screen. Like the fact that the $140 million dollar film didn’t have a screenplay. According to IMDb, over 30 screenwriters passed on the project. Marvel rushed into production to hit its May 4 release date regardless, with director Favreau, Downey Jr., and Jeff Bridges improvising scenes and dialogue.

“They had no script, man. They had an outline,” Bridges said in a 2009 interview with In Contention. “We would show up for big scenes every day and we wouldn’t know what we were going to say. We would have to go into our trailer and work on this scene and call up writers on the phone, ‘You got any ideas?’ Meanwhile the crew is tapping their foot on the stage waiting for us to come on.” In his mind, Bridges ultimately had to picture Iron Man as a big budget student film so he wouldn’t get stressed out by the idea of making it all up as they went along.

It was all a risk. But for Marvel, which had no studio of its own at the time and had been forced to license out its properties (and creative control) to produce duds such as Elektra and Fantastic Four: Rise of the Silver Surfer, everything about making Iron Man was risky—from the film’s negative pickup distribution deal, ensuring that the production company covered its own costs to make the film, and with financing pieced together using superheroes as collateral. If the movie was a failure or didn’t finish, Marvel would’ve lost the film rights to some of the characters. Not that it necessarily mattered; at the time, your average filmgoer had no idea who the comic character “Iron Man” was.

Director Jon Favreau did. And as far as he was concerned, who better to cast as substance-abusing playboy inventor Tony Stark than another well-known figure whose fame and failures had played out in the public eye? A decade ago, casting Robert Downey Jr. in a film was still considered a gamble. He had made memorable recent performances in A Scanner Darkly, Kiss Kiss Bang Bang, and Zodiac, but Downey’s reputation in 2008 was still largely that of a drug user who spent the better part of half a decade in jail or rehab.

It wasn’t until Mel Gibson, who co-starred with Downey Jr. in Air America and had become a close friend, advocated for the troubled actor’s return to the big screen by paying his insurance bond to star in The Singing Detective (directed by Gibson) in 2003. When Joel Silver later cast Downey Jr. in 2003’s Gothika, the producer withheld nearly half the actor’s salary as insurance, and similar clauses have appeared in Downey Jr.’s film contracts since.

Every new Marvel movie coming until 2022 - from Avengers: Infinity War to Spider-Man: Homecoming 2

Instead of relying on comic book lore or fancy gadgets and superpowers, Iron Man was proof that superhero movies can have a heart. Two scenes in particular stand out: the first when Pepper Potts (Gwyneth Paltrow) threatens to leave Tony, who has become singularly focused on destroying his weapons that have fallen into terrorist hands, the inventor explains that for the first time he finally believes in the work he’s doing. The second scene is during his escape from imprisonment, when the dying scientist Ho Yinsen (Shaun Toub) tells Tony not to waste his life. “Thank you for saving me,” he says; Robert Downey Jr.’s words coming out of Tony Stark’s mouth.

After Iron Man’s opening weekend, when the film grossed $100 million at the North American box office, future Marvel Studios President Kevin Feige (who was a producer at the time) knew two things: that they were going to be able to make more movies, and that they’d be able to tie them together. Favreau’s film laid the groundwork for building Marvel Studios, whose subsequent “Cinematic Universe” would become one of the biggest media franchises of all time. Ten years and 19 films later, the first Iron Man is still widely considered to be one of the best in the series, having set the tone for Marvel moving forward—with smart casting, staying true to the characters and comic canon, and humor. That and having an after-credits scene as an Easter egg for the fans who would sit around until the end.

“We put [the scene with Nick Fury introducing the Avengers Initiative] at the end of the credits so that it wouldn’t distract from the movie. People going, ‘What is Sam Jackson doing in this movie all of a sudden? What’s going on?’” Kevin Feige said in the same 2017 Vanity Fair interview. “I thought it would just begin the potential conversation of hardcore fans going, ‘Wait a minute, could that mean…’ Instead, by that Monday, Entertainment Weekly was doing sidebars about Nick Fury and who he was and what that meant. That blew up much faster than I was anticipating.”

Downey Jr. reprised the character of Tony Stark in Iron Man 2 and 3, but it didn’t have the same magic as the original. And once the Avengers movies began, his role would be delegated to becoming just one of the team; as a casual ally, occasional adversary, and even mentor, in last year’s Spider-Man: Homecoming. He would keep inventing new suits of armor and cool tech, continue to deliver snappy one-liners, and generally be the cocky, charming rogue that Stark and Downey’s identities had since blurred together to become in the general public's collective minds. But few Marvel films have been able to match the emotional weight of that first Iron Man, on-screen or off, that saw a comic book character, a struggling actor—and an entire studio—given a new lease on life.

“It was always about the movie at hand, and everyone within Marvel Studios just knows the individual movie trumps the overall picture,” continued Feige, whose only advice for other studios hoping to mimic Marvel’s success is not to focus on building a franchise: “Worry about the movie. We never set out to build a universe. We set out to make a great Iron Man movie.”

Confused about the Avengers: Infinity War ending? Let us help with the 9 questions we need answered in Avengers 4.