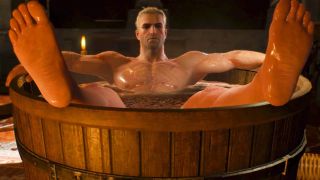 There are a lot of Witcher 3 romance options to try out - serious relationship choices to make between Yennefer or Triss, as well as choices added in Hearts of Stone and Blood and Wine. Saying and doing the right things are vital if you want to win the lady of your choice, and we're here to help you do just that.

Witcher 3 romance choices are possible with just about anyone who wants you, just as long as you don't try it on with both Yennefer and Triss. really important that - just pick one. Other than that you're free to live life free and to the fullest in The Witcher 3. This Witcher 3 romance guide will help you find love both in terms of where to go and what to do.

Triss is the red-headed sorceress who has been present in all of The Witcher games. She’s actually an integral part of the in-game history, and she is one of the main two romance options for Geralt. If you want to attempt to woo her then you’re going to need to treat her well, otherwise, she’ll leave you.

The first few things you need to do are to complete the quest A Favor for Radovid, and then A Matter of Life and Death. The former is a main quest, and the latter is a secondary quest in which you help Triss out with a problem.

Assuming you never romance Yennefer, you’ll end the game in love with her and move north to Kovir to start a new life together.

Yennefer is the raven-haired love of Geralt’s life. While she didn’t appear in either of the first two games, she was featured throughout the books and was even a guest star in some of the flashbacks during The Witcher 2.

To win the affections of Yennefer you’ll need to do a few things. First of all, you need to start the main quest The King is Dead - Long Live the King.

Finally, you need to get to the mission No Place Like Home. During this mission, assuming you’ve already done the previous bits, you can go along with her to her room and renew the physical side of your relationship once more.

Assuming you do these things and don’t romance Triss, you’ll both retire far away from all of the nonsense and chaos of your previous lives.

WARNING: You can't romance both Triss AND Yennefer

If you choose to try and romance both Triss and Yennefer, then you will end up losing both of them. That being said it is an entertaining story so if you aren’t attached to either of them feel free to give it a try. Just don’t say we didn’t warn you.

While Triss or Yennefer are the 'main' options with a narrative end, you can actually pursue romance options with a few other named characters and still settle down with either Triss or Yennefer later later. That includes the brothels - Crippled Kate's and Passiflora in Redania, Novigrad, and The Belles of Beauclair in Beauclair port, Toussaint - who have several prostitutes you can meet.

Keira is probably the most prominent of Geralt’s mistresses. Simply complete the main missions Hunting a Witch and Wandering in the Dark to be invited to her home. Accept the invitation, then complete the A Towerful of Mice quest, then finish the Favor for a Friend quest and you’ll be able to join her for a...  nice meal.

During the High Stakes quest, enter the Gwent tournament and choose to either defeat her or agree to help her. She'll then ask you to dinner and you can work out the rest from there.

You’ll have a chance to fight Jutta during the Iron Maiden quest. Best her in hand-to-hand combat and then go and visit her to talk. The rest will work itself out. make sure you accept the fight first time though, and that you win, as you only get one shot.

This is the romance option found within the Hearts of Stone DLC. At the end of the Dead Man’s Party quest, you’ll have a chance to take her a gift. Simply choose mead, brandy, or flowers and you’ll win her affections.

Syanna can be found within the Blood and Wine expansion. You just need to get her out of the Lands of the Thousand Fables safely, and then you can agree to her suggestions.