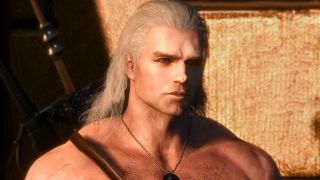 The Witcher Netflix series is supposedly out towards the end of this year but, until then, you can create your very own adventures with Henry Cavill in the lead role of Geralt of Rivia via CD Projekt Red's 2015 RPG, The Witcher 3: Wild Hunt.

Thanks to a new mod from Nexus user Adnan, Henry Cavill's likeness can be inserted on Geralt's in-game body to create an accurate replication of the upcoming TV show's take on the infamous monster hunter from Andrzej Sapkowski's fantasy novels, complete with the more rounded amulets seen in The Witcher Netflix series trailer.

Netflix's The Witcher series has cast tiny Geralt of Rivia

Cavill's face even works in tandem with The Witcher 3's famous hair physics, which grow over time in-game, and can be cut or styled in line with its length, while Geralt's toxicity status (in which the mercenary imbibes caustic potions to increase his powers) also has an effect on the Cavill model that accurately replicates the actor's intoxicated appearance from the show.

Naturally, it's only a matter of time before someone finds out what Cavill's Geralt looks like in the bath tub or between the sheets, thanks to the game's... uh, open door policy when it comes to mature content. Cavill himself is an outspoken fan of CD Projekt Red's games too, so the idea of the actor playing as himself in a number of... compromised situations is a funny one to consider.

All that's left for this mod to do is make Geralt's *ahem* other features more in line with Cavill's. Exhibit A:

Make it so, Adnan.

For more, check out your first look at Roach in The Witcher Netflix series, or watch our Release Radar video below for a guide to everything else out this week.