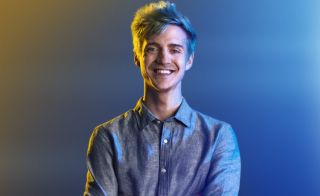 Who is Ninja? Don't worry, you're not the first person to ask that question and you certainly won't be the last. You've probably heard the terms Ninja, Fortnite, Twitch, Mixer, and YouTube thrown about in conjunction with one another and while there's a good chance with the concept of YouTube and to an extent, Fortnite, Ninja is another beast entirely. So we're here to answer the question of who is Ninja and everything you need to know about the world's biggest Fortnite star.

Who is Ninja? All there is to know about the biggest name in gaming

Tyler "Ninja" Blevins is – without a shadow of a doubt – the most well known video game player in the world. He was initially a competitive Halo player, representing top esports teams like Cloud9 and Team Liquid, before jumping over to H1Z1 and PUBG, two battle royale titles that came before Fortnite.

Ninja hopped onto the Fortnite trend shortly after it launched in 2017, which saw his channel skyrocket. Fortnite and Ninja grew alongside one another, with Ninja accumulating two million Twitch followers in the span of around six months, when he started Fortnite with just 500,000.

Jump to the current day and Ninja now streams on Microsoft's Mixer platform thanks to a partnership deal (more on that below). When he left Twitch, he was the most followed channel with almost 15 million followers – and at the time of writing, he still is, with almost double Tfue's numbers in second. He also boasts 22.3 million YouTube subscribers and over two million Mixer followers.

February 2015: While being a professional Halo player, Ninja and his family appeared on Family Feud in S016 E110.

2017: He joined Luminosity Gaming as a Halo player, before moving on to represent the team in H1Z1, PUBG, followed by Fortnite.

February 2018: Raised over $110,000 in a charity fundraising stream for the American Foundation for Suicide Prevention.

March 2018: Ninja streams with famous rappers Drake and Travis Scott, alongside NFL player JuJu Smith-Schuster and breaks the record for largest concurrent audience on a Twitch stream with 635,000 viewers.

June 2018: Won the E3 2018 Fortnite Celebrity Pro-Am while partnered with famous DJ Marshmello, which resulted in $1 million being donated to a charity of their choice. Also signed a partnership with Red Bull Esports and participated in the Red Bull Rise Till Dawn event where attendees could challenge him.

September 2018: Became the first ever esports player to feature on the front of ESPN magazine.

November 2018: Won "Content Creator of the Year" at The Game Awards.

February 2019: Appeared in NFL's "The 100-Year Game" ad for Super Bowl LIII as the only celebrity with no ties to American football. Also won Twitch Streamer of the Year at the Shorty Awards.

March 2019: Won Esports Personality of the Year at the Esports Awards.

August 2019: Became the first of many streamers to move from Twitch to Mixer, Microsoft's streaming platform, in a deal allegedly worth $8-$13 million per year. Also published his Get Good: My Ultimate Guide to Gaming book with Penguin Random House and re-appeared on Family Feud with his family, this time on the celebrity edition.

September 2019: Appeared on FOX's The Masked Singer show as the Ice Cream Cone, but he was eliminated after the first round.

Epic will never ban people for no reason even if I say anything.. you assuming they do is naive. Stop playing the victim, you aren't getting banned, I am sorry. Stop milking it.November 11, 2018

December 2016: Released the address of someone who donated to him on stream, as punishment for them having a racist alias. Known as "doxxing" and against Twitch rules, Ninja was only banned for 48 hours instead of indefinitely. He later said his temporary ban was deserved.

March 2018: While playing Fortnite with Matthew "Nadeshot" Haag on stream, Ninja used a racial slur while improvising lyrics to Logic's "44 More" song. He apologised later down the line, claiming he was "tongue tied".

August 2018: Ninja explained he doesn't "play with female gamers" on stream to avoid rumours and gossip that could start, and also out of respect to his wife, Jessica "JGhosty" Blevins. Reactions were mixed, as some claimed he should support up and coming female streamers while others say he should be able to stream with whoever he wishes, especially to protect his marriage. He has since explained his support for gender equality and said women are welcome to play with him in groups or at events where he can "control the narrative more, without stupid drama".

November 2018: He reported a player for allegedly stream sniping and stated that he would "go out of his way" to make sure he got banned. The targeted player uploaded a video as proof that he wasn't watching Ninja's stream at the time, which led to Dr Lupo – one of Ninja's friends and regular teammate – saying he believed him and that he didn't agree with Ninja's actions. Ninja later apologised to the accused, but not before saying he "played the victim" and "milked" the incident.

According to ProSettings.net, the above images showcase the gaming peripherals and Fortnite settings Ninja uses.