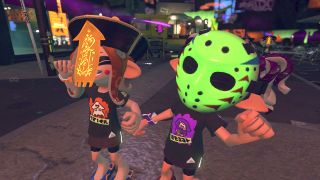 Splatoon 2 is a fantastic shooter with a bright, vibrant style and fast paced action, building off a fantastic foundation in the original Splatoon. For fans worried about the sequel getting eclipsed by another entry in the series should rest easy as Splatoon 2 isn't getting a sequel anytime soon.

Splatoon 2 Producer Hisashi Nogami spoke with Japanese magazine Famitsu about the future of the series. There isn't much left on the table for Splatoon 2, but something could still come down the line. "Balance adjustments and Monthly League Matches will continue," reads a rough translation of what Nagomi said in the Famitsu interview (Thanks, Japanese Nintendo). "Splatoon 2’s production started moving right after 1 was released. Now we also had production for Octo Expansion so we’re fully focused on the updates, and we still haven’t thought of the future. For future plans, we’ll think of them after everything is over."

As of now, feature additions, new weapons and stages, and Splatfests are all done for in the squid shooter. Even with the lack of new updates, the game still has a healthy community online. While no new content is coming to Splatoon 2, he still wants to give back to the fans who have played the series.

"We’re not yet at a phase where we can make a promise, but we’d like to return the favor in some sort of way to many people who have supported us," he said. "If you continue to support us, it might turn into reality."