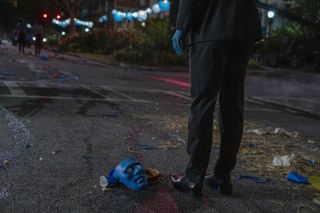 It is December 15, 2019. You are watching the Watchmen ending, pondering the final shot. There are variables at play: the egg, Angela, and what happened when she stepped into the swimming pool. You want answers. It is 2020. You're still thinking about the Watchmen series finale, expecting to hear something about Adrian Veidt’s fate and whether there will be a season 2. It is 2021. You have convinced a housemate to binge Watchmen with you. Episode nine plays. Then it’s over. They are now wondering what has happened to Doctor Manhattan, whether he’s still alive, and what has become of some of the major players in Tulsa, Oklahoma.

No matter when you watch the Watchmen series finale, we’re here to provide you with some answers about it, including a quick recap to clear things up, and a possible reveal to the final shot that maybe even Doctor Manhattan didn’t see coming.

Unlike the glacial pace of past weeks, the Watchmen ending hit fast-forward on a bunch of moving parts and plots. Here’s a mini-recap of sorts so we’re all on the same page.

First up, Lady Trieu: it’s revealed that she is the daughter of a member of Veidt’s staff. Back in 1985, she artificially inseminated herself with Veidt’s sperm, making Trieu the daughter of Veidt/Ozymandias. In 2008, she reveals to her father in Antarctica that she plans to harness Manhattan’s powers. She also tells Veidt that she saw Dr. Manhattan on Europa.

Back in the present, we see how Lady Trieu rescues Veidt from Europa. She spots his interstellar message of “Save me daughter,” and, touched by it, she sends a spaceship to bring the former Ozymandias back to witness her master plan: to take Manhattan’s powers as her own.

Meanwhile, the Seventh Kavalry, led by Joe Keene and joined by the elderly Keene Sr, are also planning on stealing Dr. Manhattan's power. They manage to capture Manhattan (as seen in episode 8) and plan to transfer his power into Joe Keene, with the also-captured Laurie Blake tied to a chair and forced to watch. It's here we see that Looking Glass/Wade Tillman is alive and hiding amongst the Seventh Kavalry by wearing their Rorschach mask.

Angela Abar manages to track down where the Kavalry have teleported Dr. Manhattan, and tries to convince them that Lady Trieu is using them to get to Manhattan. However after a long (and racist) speech about why Joe wants Dr. Manhattan's powers, he steps into the chamber to begin the process.

True to Angela's word, Lady Trieu has already one-upped them, as she teleports everyone outside by using the Millennium Clock. The side-effect is that Keene is turned into ooze, before Trieu vaporises the rest of the Seventh Kavalry.

That ooze, though, trickles into Manhattan’s chamber. The blue-hued demigod uses it to teleport Blake, Looking Glass (who had been disguised as a Seventh Kavalry member), and Veidt to Veidt’s lab in Antarctica. There, they concoct a plan to use the artificial squids to disrupt Trieu’s own plan to take Manhattan’s powers.

Back in Tulsa, Angela watches on horrified as Dr. Manhattan is seemingly ripped apart at a cellular level and dies. Trieu begins the process of taking Manhattan’s power, but is thwarted by the squid-fall. The squids fire a hole through Trieu’s hand and also causes the Millennium Clock to collapse on her, seemingly killing her.

Angela escapes the onslaught of squids after a call from Laurie in Antartica gives her a warning, and sprints to the Dreamland Theater (the same one that we began Watchmen in). Her three children are also safe there having been teleported, as well as her grandfather, Will Reeves, who she invites back to her family home.

In one final twist back at the Abar residence, Angela finds one egg left in a packet – left there by Manhattan – and recalls their first meeting involving him explaining that he could “theoretically” transfer some of his powers to organic matter and, if someone were to consume that matter, they could get his powers.

Angela steps outside and eats the egg. She steps onto the water and… fade to black. All that’s left are questions.

Does Angela have Doctor Manhattan's powers?

This is the million-atom question and which may have also been answered by show creator Damon Lindelof. Speaking to Rolling Stone he says, “Outcome number one [in the final scene] is that she just sinks to the bottom of [the pool]… Outcome number two is that she starts to walk on water and realise that she is imbued with godlike powers.”

Lindelof drops one big deliberately teasing hint: “That would certainly explain the promotional poster for Watchmen that we put out there 15 weeks ago; she’s certainly looking a bit blue there.”

Reading between the (obvious) lines, it certainly feels like Lindelof’s intention was to ultimately leave it unclear, but he’s edging towards Manhattan transferring his powers to Angela.

Doctor Manhattan certainly appears to die during the course of the Watchmen finale. He is forcibly ripped apart by Trieu’s Millennium Clock and seemingly destroyed. It’s worth noting, though, that Manhattan’s ‘death’ here is eerily similar to his origin story: a sealed container and watch batteries. So, there’s certainly a great deal of ambiguity running through Manhattan’s farewell. Plus, if anyone could die and re-assemble themselves at an atomic level, it’s Doctor Manhattan.

The fate of Veidt, Keene, and Lube Man

Keene and Veidt’s fates appear pretty clear-cut: Keene is dead and Veidt has been taken into custody by the FBI.

But what if Keene is still alive? The last time we see him (or at least, what used to be him) on screen, he was touched by Doctor Manhattan and used as a conduit to teleport Veidt, Laurie, and Wade to Antarctica. The show makes several references to Manhattan being able to transfer his power. If he can do that, he may have ended up inadvertently leaving the door open for a Keene return.

As for the identity of Lube Man. Many surmised it may have been Agent Dale Petey and those guesses may have been correct. The ninth and final entry in Peteypedia, the complementary materials released by HBO after each episode every Sunday, has revealed that Petey has been fired from the FBI, with a hint that the anti-vigilante task force may be investigating him in future. Yes, he may well have been Lube Man. He certainly fits the bill. And the onesie.

Will there be a Watchmen season 2?

Damon Lindelof has been pretty open about this season of Watchmen being one-and-done. Unless a compelling story surfaces, there won’t be a Watchmen season 2. At least not with him at the helm. He doubles down on that again in an interview with Vanity Fair: “Whether or not I’ll be involved will be driven almost entirely by whether or not I come up with an idea that I feel is worthy of telling another story…But it’s its own thing – it’s so much bigger than me.”

Lindelof, much like his previous seminal work, The Leftovers, is choosing to let the mystery be on this one. But the door is still very much left open.