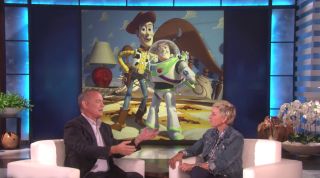 Voice roles in the Pixar Universe don't get much more iconic or instantly recognisable than Ellen DeGeneres' Dory (from Finding Nemo and Finding Dory) and Tom Hanks' Woody (from the Toy Story trilogy).

Sadly, it's unlikely that we'll ever see the two characters interact in a feature-length film, but the two actors gave us the next best thing when Hanks - who was promoting his upcoming film Sully on Ellen's show - instigated an impromptu Pixar-off between Woody and Dory with hilarious results.

Check it out below (and be sure to close your eyes)...

After Hanks and DeGeneres entertained the crowd with their improvised sketch talk turned to the challenges of voice acting, with the Finding Dory star noting that "I’m always hyperventilating. Dory’s always left behind, or out of [breath], so I’m always out of breath and they’re making me [huff and puff] so that’s exhausting". For his part, Hanks stated that giving "92 different versions of the same line" is its own type of exhaustion, bringing back his Woody voice to say "Close that door!" in a few different ways.

It's a really great watch, and it's enough to make me want a Pixar movie starring Woody and Dory. Please animation Gods, let's make this happen.