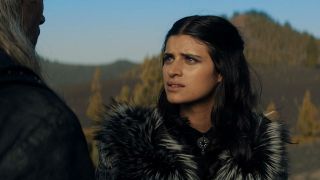 The Witcher Netflix series showrunner Lauren S. Hissrich has detailed two previously-unknown deleted scenes that were left out of season 1 – including one that she regrets removing, and another that would have convoluted an already-complicated Witcher timeline.

Hissrich told Pure Fandom that “so many scenes had to be cut from the final episodes” but one in particular stood out: “A lovely scene in [the third episode] where Yennefer, Fringilla, and Sabrina all discussed how they felt about their transformations, and looking back, I wish we could have kept it. It was such a gorgeous example of female friendship, and it also would have served to ground Fringilla a bit more before she joined Nilfgaard.”

Another would have seen Yen come into contact with a key Witcher character much earlier – a young Triss-in-training at Aretuza.

“It served to show how far Yennefer had come in her years at Aretuza and created a sense of mentorship between these two sorceresses,” Hissrich explained. “Looking ahead at some stories unfolding in season two, I wish we still had those scenes!”

These aren’t the only Witcher deleted scenes that remained on the cutting room floor. Hissrich recently shared the script for season 1’s alternate final scene. The moment between Henry Cavill’s Geralt and Freya Allan’s Ciri – which was brief in the original Witcher ending – was given far more time and space to breathe, but perhaps was somewhat understandably removed in favour of a tender, almost-wordless interaction between the two linked by the Law of Surprise.

While The Witcher season 2 isn’t likely to arrive on Netflix until 2021 – and no word on whether any deleted scenes will be released in the interim – we’ll have to make do with an animated Witcher movie, Nightmare of the Wolf, for our next trip back to The Continent.

Bulk out your watchlist with our look at the best shows on Netflix.