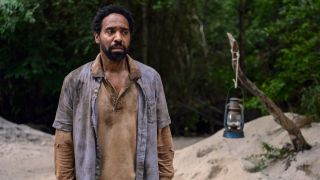 "The World Before", The Walking Dead season 10's eighth episode before its annual Christmas break, picks up the pace to a steady tempo that's more befitting of a mid-season finale, but the chapter's more focused series of set pieces still can't quite scrub away the sour taste left by what has been an exceptionally slow-going season so far.

The good news is that a lot of the plot holes left by the previous episode, "Open Your Eyes", are immediately addressed via a straight played opening, which clearly explains how Dante managed to sneak into Alexandria, why Lydia didn't recognise him, and the ways in which he's been meddling with the community's affairs behind the scenes. HIs subsequent tussle with Rosita as Walker Siddiq comes this close to devouring his own child also feels appropriately dark and tense, while finally giving Rosita something to do beyond pouting at each of her three (sorry… two) suitors.

While I'm still not convinced that a man as seemingly normal as Dante could willingly integrate himself with Alpha's off-kilter cult, the inability to pin him down as a character is kind of what makes this unexpected spy such an interesting antagonist. In fact, I'd venture to say that Dante has demonstrated more staying power as a villain in the last two episodes than Alpha has for the last two seasons, making it a real shame that Gabriel decides to stick a knife into his neck before he's even gone to trial.

Sure, the good father's surprise act of violence works as a shock moment that allows actor Seth Gilliam to convey more raw emotion than he's expressed on the show for quite some time, but it screams of a scene that's designed to further the mechanisms of the plot rather than serve the character himself. His continuing romance with Rosita, meanwhile, continues to baffle, with the pair's latest scenes once again devoid of any relational chemistry whatsoever.

In more exciting developments, Michonne, Judith, and Luke's excursion to Oceanside results in an unexpected run-in with Virgil, another new character to the show with no prior connection to Robert Kirkman's source material. Previous theories from season 10's trailer had pinned Virgil down as the catalyst for Danai Gurira's upcoming transition from the show and into The Walking Dead movies, suggesting his place of origin could be the same community Rick got whisked away to in season 9. While Virgil reveals his family does happen to reside in a military base (that may or may not possess a working helicopter), Michonne's decision to escort him home without Judith suggests there's more to come from our Alexandrian queen before she takes off for good.

Lastly, Carol continues to push the limits of the audience's goodwill with every passing episode, this time by jeopardising the mission to take out the horde and potentially sentencing several characters to death by falling for Alpha's trap without hesitation. The sight of Daryl, Carol, Aaron, Connie, Kelly, and Jerry at the mercy of a thousand Walkers sure is a strong place to end for the mid-season, though, and that carefully handpicked collection of characters suggests at least one or two almost definitely won't survive the oncoming gauntlet. Sorry, Jerry, but I think you're Walker toast.

"The World Before" marks a perfectly tolerable denouement for what has been a radically inconsistent collection of episodes for season 10 so far. Events are now primed for what I hope is a punchier and more satisfying latter half for The Walking Dead's latest season, but there's now every chance that this ongoing saga of the Whisperer wars could derail the show entirely come its grand finale. With a new spin-off and a full blown theatrical movie on the way next year, 2020 holds big things in store for The Walking Dead; let's hope the original show can bring back the magic for a hat trick.

For more, check out our full Walking Dead recap to catch up before season 10, or watch below for our latest episode of Dialogue Options below.