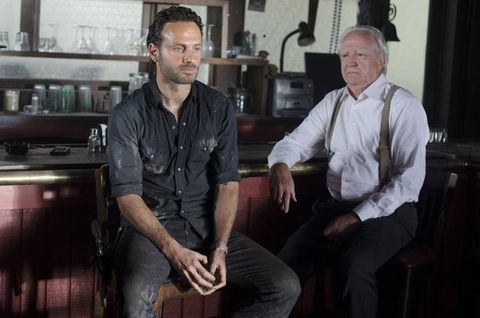 Normal service is resumed – as is some over-familiar plotting...

THE ONE WHERE The dead are mourned, Hershel goes AWOL, and Lori crashes a car.

VERDICT Gawd, The Walking Dead can be frustrating sometimes. Why do they keep on playing out the same patterns? In this episode we have a. someone falling sick b. someone going AWOL and c. Rick going to search for them. These are all the kind of plot elements that have already become over-familiar. It doesn’t help that these similarities are underlined by all the discussion about the search for Sophia and the fate of Otis.

My other big gripe? Lori. What the hell is she up to? First she tries to convince Rick not to go on his Hershel hunt. Then she goes traipsing off after him – presumably without telling anyone – for no good reason. This is completely moronic behaviour, and totally uncharacteristic. It’s an insult to the character, frankly, and smacks of a desperate attempt to create some jeopardy, even if it must be through completely artificial means.

Still, there’s plenty to admire about this episode, including a heap of fine acting - Scott Wilson’s performance as Hershel is particularly powerful, while Jon Bernthal is dependably brilliant as Shane. There are some neat touches too: the sequence where Carol angrily tears up a patch of Cherokee Roses (the flowers Daryl discussed with her in episode four ) is a lovely way of symbolising her grief, and much more effective than any snot-nosed, teary speech.

But the highlight is the confrontation between Rick and those two strangers from Pennsylvania, Dave and Tony – it’s incredibly tense, but unlike that car crash, never rings false. Although his instincts are vindicated in the end, there are moments when it feels like perhaps Rick is being unreasonable. What right does he have to deny others shelter? How do you know who to trust in a world like this? Ultimately, you can’t. Anyone you encounter could be a bandit pretending to be a decent sort, planning to slit your throat when you sleep. This brief encounter perfectly illustrates the paranoia-inducing nature of the dangerous world they now live in. I just hope we get back into that world, and away from the farm, sooner rather than later.

IS IT JUST ME… Or is anyone else struggling to remember Beth’s name? Fainting is the most memorable thing she’s done so far. Please can someone write her a personality?

NITPICKS Since when did zombies lie around, making no noise, acting like they’re dead?

FEATURED MUSIC The track which plays at the end is “The Regulator” by Clutch .

BEST LINE Hershel: “There is no hope, for any of us.”