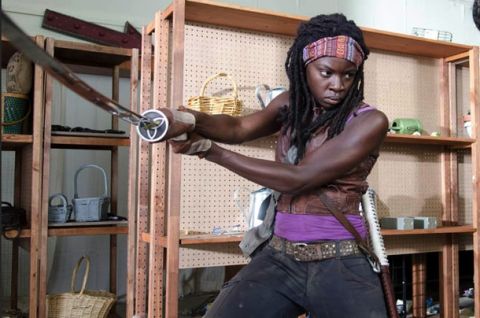 THE ONE WHERE Several months on from the events of "Besides The Dying Fire", Rick and co find a prison, and decide to make it their new home.

VERDICT Last year, Walking Dead showrunner Glen Mazzara promised that the show would maintain the sense of urgency and level of action we saw in the latter stages of the season. “Seed” backs up his words. Viewed as a statement of intent, it inspires huge confidence for the rest of the season.

Audaciously, it skips forward several months in the lives of the characters – arguably a risky move. Of course, practical factors were surely key to that decision: the logistical problems of filming wintery scenes in the blazing heat of an Atlanta summer are probably insurmountable. Skipping forward also makes the fact that young Chandler Riggs (Carl) is visibly (and audibly) ageing a little easier to deal with.

True, the idea that Rick and co have been going round in circles ever since they left the farm (without, somehow, ever stumbling across the prison!) is a little hard to swallow. And it’s sad to realise that we won’t be seeing any snowy vistas peppered with frozen zombies. But in general, the leap forward is a welcome development, because it revitalises the characters.

Suddenly, Rick is no longer the man we knew; he’s been hardened by his experience, and his relationship with Lori has all but disintegrated. Fans of the comic knew that the character would evolve into a darker character, but that process seems to be happening slightly faster in the TV series, and the prospect of seeing how far it goes in this year’s run of 16 episodes is exciting.

There are other promising changes too. In another step forward for the show’s female contingent, Carol is now pretty handy with a gun (it’s also noticeable that Maggie is included in the hack-and-slash crew team that enters the prison). Little Carl is growing up fast, has got pretty bad-ass (how does he even carry a gun with a silencer that big?!) and seems to have developed a crush on Beth. Most shockingly of all: T-Dog actually gets something to do! Add an updated title sequence, and it’s almost as if we’re watching a new show.

Those who thought that our heroes’ extended sojourn at Hershel’s farm was, for the most part, far too sedate and bloodless should be immensely satisfied by this episode. As Rick and co clear the grounds of the West Georgia Correctional Facility (a magnificent looking set, beautifully lit), it’s practically non-stop carnage. The sequences where they explore the prison’s labyrinthine corridors, lit only by their flashlights, are tremendously tense, with echoes of the Resident Evil games.

It’s a surprisingly ruthless episode, too. You’d have thought that after offing Shane and Dale (plus some other walking bags of meat no one really cared about…) at the end of season two, we might get an episode or two of respite. But no – Hershel gets bitten, resulting in one of the nastiest bits of gore in the entire series, as Rick hacks his leg off with a hatchet (Did we really need that last close-up? Jesus! Glen Mazzara, I'm invoicing you for the cost of getting the puke stains off my couch.)

Will he survive? And do we care? It feels somewhat like Hershel has served his purpose; that he belongs to a world they’ve now left behind. On the other hand, now that Dale’s gone, the group could really do with a wise old bird… and it ain’t gonna be an owl. If Hershel survives, he could fill that gap, acting as the voice of reason. He’s got the beard for it now!

Of course, what with all this stabby fun, memorable dialogue is thin on the ground (barely a word is spoken for the first five minutes). There’s also little in the way of the smaller character moments that are one of the best things about the series (with the notable exception of the chilling sequence where Lori – reflecting fan speculation - voices her fears about what’ll happen if her baby dies in the womb).

But there’ll be plenty of time for that later. The episode where they discovered the prison was always going to be a hackfest, and they did a sterling job of it. As the credits rolled, I suddenly realised something: I didn’t miss Shane one little bit. So let’s chalk this one up as a success.

BEST BIT It’s a delight to finally see Michonne in action properly, decapitating multiple zombies with one slash of her samurai sword... But I’m plumping for the infuriatingly tricky-to-kill warden-zombies, kitted out in full riot gear. Such a simple idea, but such a cool one!

MMMM, TASTY It’s good to see The Walking Dead exploring the world of avant garde cuisine; the show now has its own equivalent of Doctor Who ’s fish fingers and custard. Owl and dog food probably has less chance of catching on, though… (Incidentally, is it just me, or did that owl look like it was flashing at Daryl Maybe the little feathered pervert deserved to die.)

Beth sings the traditional song “The Parting Glass” by the campfire.

As the group check out the cells, we hear “Noisy Sunday” by Patrick Watson, from the album “Adventures In Your Own Backyard”.

The Walking Dead starts airing in the UK on FX on Friday 19 October, at 10pm.