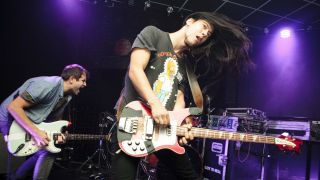 Rockstar Games and LA noise rock band Health don't so much have a working relationship as a great love affair. It all started when Health scored Max Payne 3 for Rockstar – creating the amazing track Tears in the process – and it carries on to this day. Today marks the release of Grand Theft Auto Online: Arena War Official Soundtrack, containing nine exclusive tracks from the band, a project they managed to fit in before embarking on the tour for their latest album, Vol 4: Slaves of Fear.

"The score stuff is liberating," Health's bassist John Famiglietti tells me over a plate of oysters in Brooklyn. "It's way more… well, not fun, but like, you don't have all the insecurities you do with your own music."

Jake Duzsik, who sticks with shisito peppers after telling a story about oysters and cholera, agrees. "Anytime we work with Rockstar and we're scoring something, we're not trying to assert our aesthetic identity the way that we are in a song on our own records – we're just trying to make music that makes the game experience good," Health's guitarist and vocalist tells me. "So it's kind of relieving that you're a component of many in a collaborative work, rather than finishing a record and trying to put it out and say, 'here's our new sound, hope you don't hate it.'"

For Duzsik, it's also a chance to play with different styles that wouldn't necessarily work for a record. "For me, it's gratifying because we get to a bunch of melodic stuff instrumentally that we wouldn't put in Health song."

When Rockstar first started working with Health around 2012, scoring a game was a new experience for a band that's more familiar with playing out of sweaty Californian clubs and challenging the status quo with albums like 2007's Health and its 2009 follow up Get Color. "Now that I look back on it, with what we had released as a band, it's really crazy that they let us do it," Duzsik says with a smile. "I know that if you're hiring a composer it's just one guy making music, but I think that they just really took a chance."

Duzsik isn't much of a gamer – Famiglietti is the one who, when we speak, is trying to finish Red Dead Redemption 2 before a European tour starts – but that doesn't matter, not really. For Max Payne, they worked off video capture of levels to get a sense of the sound they needed. "You don't really need to play games to score them," admits Duzsik, and the results speak for themselves.

"I was fucking around so much because I didn't realize the game was going to be so long. Red Dead Redemption, all the missions in total took me like 15 hours. This thing is like 100 hours just missions."

"It would actually be amazing if you could play it and slot the music in, but no, so just the video is fine," agrees Famiglietti, before talk turns to rumors about secrecy and how good Rockstar is at keeping projects under wraps. "For Max Payne 3, every level has a visual world – this one's at night and it's out in the jungle, versus this is the daytime in Sao Paulo – so the tones and how you want to score it would be really hard if you didn't get to see it," says Duzsik, shaking his head. The fact that Rockstar does let Health peak behind the curtain during development just shows how much they trust and respect these musicians from LA.

"Working with them – which we learned during Max Payne 3 – we've been very lucky because Rockstar never really expected us to do anything that wasn't us," Duzsik continues. "It's not like they're going to say 'hey, we want this to sound, like, really sunny and poppy,' and that's not what we do. That would be more like work for hire. There's mutual respect. Obviously, they're very good at what they do and we trust Ivan and Sam [Houser]'s opinion of how everything is going to work."

The Ivan he mentions is Ivan Pavlovich, Director of Music and Audio at Rockstar Games, and the man with one of the coolest jobs in the games industry. "We became really really good friends with the Health guys after Max Payne experience," Pavlovich tells me. "We understand each other, and we have faith in each other and trust each other. It's a very good working relationship, and they know that we always support them."

"We've been holding out waiting for this window to work with them again and do more score with them, and this opportunity came up and we called them right away. It just happened to be perfect timing. We promised them it wouldn't take as long as Max Payne 3 took, so we did it very quickly and let them get on their way and start promoting their album."

Rockstar approached Health for this project because their sounds seemed like a perfect fit and, as Pavlovich tells it, "anybody who has ever worked with us, we always try and find ways to work with them again; It just comes from a place of respect for them."

The relationship has made working together easier too. "It's pretty easy if they need to give us notes," says Duzsik. "They can tell us what they want or if we have questions, there's not any awkwardness. The lines of communication are totally fluid, there's no 'how do we talk to these guys without pissing them off?' because we already know each other."

The guys from Health both say that Rockstar shows real respect for music in their games, and it doesn't hurt that they admire the final product. "I think Rockstar games are legitimately cool," adds Famiglietti, and talk turns to why Rockstar are so good at what they do. Everyone at the table has their own theory - time, an approach to games as an artform, authenticity - but everyone can agree it's something special.

Back at Rockstar HQ in New York, fresh from a live concert to showcase the music of Red Dead Redemption 2, Pavlovich thinks the secret to success is simple: "For all the people who started the company, music was a very personal part of their lives, so when they started making video games they pulled something that went hand in hand in it," he says.

"Well, before I was here the people who started this company always valued music. They were going around the world and pulling in artists that they were fans of and then they started creating these radio stations for the Grand Theft Auto series and it was all very personal for them. We just continued that legacy, and they allowed us to."

The Grand Theft Auto Online: Arena War Official Soundtrack is on sale today. Health's latest album, Vol 4: Slaves of Fear, is also out now, and you can also catch the band on tour.