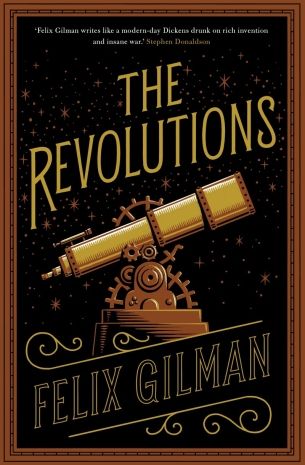 Felix Gilman is hot stuff, according to the quotes on this book. And he’s deserving of such approbation.

The Revolutions is set in the late 19th century, against a backdrop of spiritualism and cast-iron confidence in progress. This is an age where the secrets of the spiritual world can surely be decoded in the same manner as those of the physical. Journalist Arthur Shaw and his fiancée Josephine find themselves dragged into a conflict between the peculiar fraternities of London’s magicians, resulting in Josephine finding herself on Mars…

The great strength of Gilman’s writing is his prose, followed by his world building, and coming in a close third, his characterisation. He evokes the era as skilfully as one of his magicians might. Unlike so many modern faux-Victorian fantasy novels, this one manages verisimilitude. Never a note rings false. Frankly, that’s something of a breath of fresh air in the current steam-choked climate.

The same can’t be said for the story, which takes an inordinate amount of time to pressurise its tanks, so to speak. Gilman’s research is thorough and seamlessly integrated into his world. But as fascinating as the fabric of the artifice is, there’s a little oomph needed in the plot, which intrigues but does not excite. In many respects, this is a Jonathan Strange & Mr Norrell for the Victorian period, but sadly not quite as gripping.