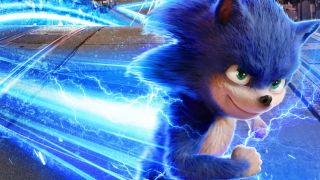 It's been a weird run for the Sonic the Hedgehog movie. Earlier this year, the movie's production team behind delayed the video game adaptation's release into 2020 after a major backlash from fans over how the eponymous speeder looked.

One of the movie's producers, Tim Miller, who directed the first Deadpool with Ryan Reynolds and is leading the upcoming Terminator: Dark Fate, told Variety that fans "will be pleased" with the new design.

“This is a franchise, and it has to be great,” he said. “Look, I was with fans and so was Jeff.  When the s–t hit the fan, I went over there and said, “The most important thing to do, man, is say, ‘I f–ked up. He’d already sent a tweet out an hour before I got there. He’s a good man. It was exactly the right way to handle that. The fans have a voice in this too. There’s a right way to listen.”

The original design gave Sonic, who is voiced by Ben Schwartz, human-like teeth, a strange stunted anatomy, and removed his trademarked gloves. The debut trailer, to some controversy, also featured Gangsters Paradise. Jim Carrey, on the other hand, won over many fans.

Miller said that he had seen the new designs and that fans will notice the improvement. The Sonic movie has been delayed until Valentine's Day 2020 "to make Sonic just right," back from its original November 8, 2019 release date.

Maybe this delay will give the Sonic the Hedgehog movie a better shot at cracking our list of the best video game movies.