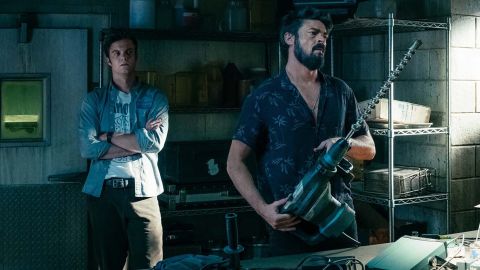 A near essential slice of superhero storytelling, which sidesteps the hot-headed, hard-hitting tropes of the genre for an even harder-hitting approach to confronting contemporary issues.

Superheroes movies and TV shows are in danger of becoming predictable. In-between Marvel’s factory-style system of pumping out squeaky-clean MCU movies and DC’s darker-than-dark efforts, there are very few genuine alternatives on the horizon.

The Boys is looking to change all that. Amazon Prime’s new show mostly succeeds in a single bound, too, thanks to a pilot that’s short on exposition, but packed with style, brave storytelling, and a sense of belonging in 2019. Lest we forget, superheroes have always been at their most relevant when reflecting real-world politics, and The Boys succeeds in doing that without pulling any punches. It’s a worthy addition to TV’s increasingly large superhero roster – and one that asks some serious questions of its more by-the-numbers peers.

Based on the comic series by Garth Ennis and Darick Robertson, The Boys takes place in a world where superheroes are franchised; they are marketable commodities that are licensed out to cities to help alleviate crime rates. All at a cost, of course. And at the heart of turning superheroes (or Super Ables, as the show calls them) into statistics is Vought, a mega-corporation that provides a platform for the Seven, the most famous (and corrupt) Super Ables in the world.

Despite centring on superheroes, the series doesn’t begin with costumed vigilantes scaling skyscrapers. In The Boys, the little guy matters most. It’s a perspective that immediately helps freshen up a genre that’s often more concerned about capes and cowls than collateral damage and character studies.

The show meticulously takes its time introducing us to Jack Quaid’s Hughie, a meek, down-on-his-luck electronics worker who’s girlfriend is unfortunately ripped into pieces by A-Train, an onrushing Super. Things kick into gear when Hughie seeks revenge after Vought attempts to make him sign an NDA covering up the death.

What follows is a smart opening episode that just about manages to squeeze in all of the key players and disparate story threads into one, fluid narrative. Karl Urban’s enigmatic Billy Butcher crackles with charisma as he helps everyman Hughie get one over on Vought.

Urban’s indescribably magnetic star quality sets him apart from much of the (so far) pedestrian cast, and it remains to be seen just how overpowering his presence becomes later in the season – and the show can’t quite decide whether he’s British (London Calling plays during a fight scene, and he mentions the Daily Mail) or a Kiwi, as evidenced by Urban slipping more into his native New Zealand accent from time to time.

Then there’s the Seven. Their leader, Homelander, is a whiter-than-white hero who is very similar to the Watchman character Ozymandias and risks never really being more than a one-dimensional villain. More interesting is the newest member of the superhero squad, Starlight, who gets the gig via an extensive Vought-managed interview process heavy on demographic analysis. Starlight is immediately accosted by The Deep, a dollar-store Aquaman and an out-and-out douche.

It’s with this storyline where The Boys excels thanks to its unflinching creative choices: Starlight is sexually assaulted in the show’s opening half an hour. That’s a blunt description and uncomfortable to read – because it needs to be.

The Boys doesn’t shy away from its sexual politics, immediately evoking the #MeToo movement in a scene that feels immediately familiar to those of us who have spent time reading about disgraced comedians and monstrous movie producers. Simultaneously, the moment will no doubt alienate those wanting to watch a typical power fantasy series. Erin Moriarty superbly carries her wounded Starlight through the rest of the premiere.

Much like with the lack of emphasis on the Supers themselves, The Boys is less concerned with playing up to the expectations of what a superhero show should do and, instead, using the genre as a foundation to explore compelling stories. That evokes the same sense of spirit that the likes of Stan Lee achieved so wonderfully back in the fledgling years of Marvel Comics.

And, of course, there are Watchmen comparisons to be made. For the most part, The Boys avoids ripping off the iconic graphic novel: while it has the same level of grit and griminess as Alan Moore’s seminal superhero classic, the show strays away from that well-worn path and forges its own story. Preacher fans, too, will appreciate that the creative minds behind that comic book adaptation bringing the same level of confident, stylish storytelling into another Ennis adaptation. Much like Preacher’s opening salvo, it strides into view with the well-worn swagger of a show that’s been around for several seasons.

The Boys is by no means perfect – the jokes often fall flat and the show is already guilty of an uneven tone that juggles heart-wrenching drama one minute and Tarantino-esque scraps the next – but it’s undeniably refreshing. More than that, it’s unpredictable; Superheroes, after all, don’t have to be all cartoonish violence and quippy one-liners. Sometimes, just sometimes, they have something meaningful to say.

With the premiere, you instantly get the feeling that The Boys is special and part of a conversation you’ll want to follow until its final words. It’s a little wonder it’s already been renewed for a second season. DC and Marvel take note: your new competition is here.

A near essential slice of superhero storytelling, which sidesteps the hot-headed, hard-hitting tropes of the genre for an even harder-hitting approach to confronting contemporary issues.