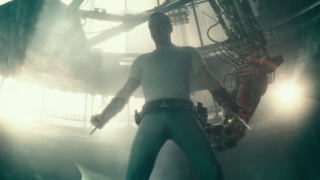 The Assassin's Creed movie continues to look like it could very well break that 'videogame movies are painful at worst and mediocre at best' mould. The attention to detail for the silverscreen debut of the history-hopping franchise is reaching impressive levels of dedication to the stabby series. Not only does the new claw Animus for jumping into the past look incredible in action, Justin Kurzel has revealed that it has a specific connection to the eternal Assassins vs. Templars war.

While Fassbender's Callum Lynch is stuck inside a facility run by modern day Templar corporation Abstergo, the Animus itself is inside something much more significant and it's all because director Justin Kurzel is on a quest to make the 21st century and the Spanish Inquisition flow together seamlessly. “The real challenge is how you breach the present and the past. We have many devices that we’ve worked into the present that almost feel as though the history of the film is shadowing the present day,” he explains in an interview in the new issue of SFX magazine.

"Even the Animus is built in an old Templar church. They’re surrounded by the weaponry of past Assassins and past murals of Templars. I wanted a space where you could put something very modern in, which is this Animus machine we’ve created, but for it all to seem connected to some sense of history and place in the past.”

This on top of the fact that Kurzel decided to shoot the historical sequences in Spanish adds another string to the already deadly authenticity bow. Even better is the fact that we don't have long to wait. The Assassin's Creed movie is out in US cinemas on Dec 21, 2016, while we'll have to be a little more patient until January 1, 2017 in the UK.

Read the full interview with director Justin Kurzel, as well as stars Michael Fassbender and Marion Cotillard in the brand new issue of SFX magazine out now. Alternatively, subscribe to future issues here.