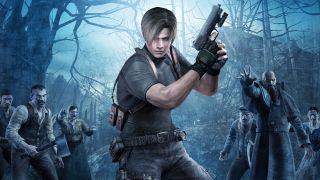 Sometimes it's necessary to give a gaming series a kick square in the pants, to move it in a different direction or make it relevant to a new audience of gamers. We’ve raided tombs, fought shadow lords and murdered moon Nazis to bring you the best gaming reboots, refreshes and do-overs in the history of Xbox.

There’s a lot to love about Lara Croft’s original adventures, and they remain the Raiders of choice if you value puzzles, skill-based platforming and polygons you could cut yourself on. Crystal Dynamics were handed the keys to the series after the disastrous Angel of Darkness, and after an excellent reboot trilogy, they repeated the trick in 2013 with their second reinvention of Lara Croft. The simply named Tomb Raider is a more story and spectacle-focused affair – last year’s sequel would expand on its downplayed tomb and puzzle elements – and one that succeeded in revitalising a gaming icon who was in danger of being left behind.

Ninja Theory’s divisive reboot recasts Dante as a snarling whelp with a fancy new hairdo, and coupled with the halved framerate this was enough to get the internet up-in-arms. (The internet, enraged? Surely not.) In truth, the combat isn’t as deep as the system in DMC 4, but this is still a fine action game with a great story, a sense of humour and some of the most visually impressive environments we’ve seen. While it’s not yet received a sequel, the Definitive Edition doubles the framerate and adds a raft of new modes. Now in its final form, it’s a worthy competitor to the reigning monarch of character action games, Bayonetta.

While it didn’t go on to spawn a new series of Strider titles, the 2014 reboot is a cracking one-and-done platformer, and a great lesson in how to refresh an old game for a modern audience. Drawing from the arcade Striders, the wildly different console versions, and the original manga, this blistering reboot is a sort of compilation of hero Strider Hiryu’s best bits: one that retells the central story of a high-tech ninja tasked with defeating a powerful dictator. Inspired by modern trends as much as it is by the past, Strider 2014 adds a Metroidvania-style open world that gradually unlocks as Hiryu acquires new abilities. The simple combat has been expanded massively too.

Rayman was one of the pillars the mighty Ubisoft was built on, but before Origins arrived back in 2011, the jolly French hero seemed doomed to an early retirement. For the longest time, the only Rayman games around were those cute/annoying/please-make-them-stop Rabbids spin-offs, but with Origins, he put them firmly in their place. The first thing you notice about the game is its exquisite painterly aesthetic, made possible thanks to the UbiArt framework that reinvigorated 2D game art. Looks aren’t everything, however, and it’s Origins’ winning level design, stage variety, and playful sense of humour that rescued Rayman from obscurity.

We were tired of World War II shooters long before Call of Duty 4, so this landmark game was long overdue. Modern Warfare updates the action to the present day, in a thrilling, twisty story that straddles realism with 24-style bombastic action. This is CoD’s sweet spot, thanks to a generally plausible story that lacks the toppled landmarks and uncanny Spacey of more recent games. Everyone remembers the atmospheric Pripyat level, or that bit with the nuclear bomb, but Modern Warfare’s biggest contribution to shooters is its surprise RPG elements. Succeeding in CoD’s multiplayer now grants XP, which can be used to unlock equipment and abilities.

While we’ve yet to enjoy the sequel on consoles, this faithful reboot of the beloved X-COM series was gratefully received on Xbox 360 back in 2012. Unlike its middling third-person shooter spin-off The Bureau, Enemy Unknown is the real deal: a turn-based strategy of enormous depth and replayability. A game about repelling an alien invasion, Enemy Unknown is different each time you play, thanks to procedural events that happen as you scan the globe for alien activity, and the random pool of soldiers you soon grow attached to. Lose a precious team-member and they’re gone forever, leaving just a memorial message and a hole in your heart.

Yes, the first two Fallouts might be better RPGs, but Bethesda did an exceptional job translating the spirit of the isometric originals to the third dimension. The iconic Pip-Boy and that thin sheen of apocalyptic filth are all present in Bethesda’s game, but now we can traipse across the Wasteland in first-person, listening to ironic tunes from the ‘40s and ‘50s as we do so. However, Fallout 3’s masterstroke is its V.A.T.S. targeting system, which mashes up turn-based and real-time combat in a slimy purée of exploding limbs and slow-mo headshots. Fallout 3 paved the way for Obsidian’s brilliant, if buggy, New Vegas which restored the series’ role-playing chops.

There had been 3D Castlevanias before, of course, but none had captured the Gothic grandeur of the side-scrolling games, which had reached a crescendo with the epic Symphony of the Night. Lords of Shadow comes close, even if it plays completely differently. It’s a sumptuous action-adventure that rewinds the clock to before Dracula even existed. Developer MercurySteam pulled out all the stops to create a visually stunning adventure with an atmosphere reminiscent of Konami’s best, but that manages to evoke the films of Guillermo del Toro, and even Shadow of the Colossus, too.

Who better to design a modern reboot of Pac-Man than its creator, Tōru Iwatani? You’ll remember the original rules of Pac-Man, of course: you gobble all the dots, you avoid the ghosts, then you gobble the ghosts after snaffling a power pellet. Championship retains those basic rules, but ramps up the speed the longer you stay alive. It also throws in a load more ghosts, leading to hilarious spectral conga lines. Like all the best modern arcade games, Championship is a visual and aural treat, boasting a swish neon aesthetic and thumping dance soundtrack.

NES games weren’t exactly known for their ultra-violence, so that’s one way the Ninja Gaiden reboot differentiates itself from the 8-bit series. The other is its greatly expanded combat system, which adds an assortment of weapon types, combo attacks and special abilities to Ryu Hayabusa’s arsenal. Despite this, the acrobatic platforming of the NES originals remains largely intact, bolstered with new moves that make the most of the third dimension. Ninja Gaiden might play similarly to its contemporaries – Devil May Cry and God of War – but it’s much, much more difficult, requiring a huge amount of skill if you’re to see the story through to its grim conclusion.

With almost the entire cast having been wiped out in Armageddon, it was time for a new beginning when 2011’s Mortal Kombat rolled around. On the brink of defeat by evil emperor Shao Khan, Raiden sends a telepathic message to his younger self: an act of cheeky timeline divergence that neatly unties the tangled mess the series had become. We’re returned to the first Mortal Kombat tournament, to a time when all of the combatants were still alive, or still human, and in that spirit the side-on fighting was newly simplified too. It’s both more approachable and much gorier than previous games, thanks to its excruciating X-Ray moves.

Rare’s Killer Instinct was so tied up with the SNES and Nintendo 64 that it was a welcome surprise to learn of a reboot for Xbox One. The previous games fell somewhere between Mortal Kombat and Street Fighter, boasting the supernatural combatants of the former, but with the latter’s more family friendly aesthetic. That friendliness carried over to the combat, which was perhaps shallower than Capcom’s best, but much easier to get the hang of. This welcoming nature returns for Killer Instinct 2013, a generous free-to-play fighter with an active development process that sees it improve with each new season.

Technically, The New Order is a sequel to middling 2009 game Wolfenstein, but its dramatic leap in quality succeeded in giving this venerable series a new lease of life. There’s also the little matter of the setting: leaving WWII firmly behind, The New Order imagines an alternate 1960s in which the Nazis won the war. Waking up in this grim dystopia after a 14-year coma, B.J. Blazkowicz quickly resumes his raison d’être – killing Nazis – although the surprisingly well-written story also finds time for stealth sections, romance, tragedy, and even a ludicrous section set on the moon.

Speaking of ancient first-person shooters being given new life, here’s Shadow Warrior. While The New Order did much to humanise its hero with a more progressive, nuanced story, Shadow Warrior goes the other way, doubling down on the fast-paced action, absurd ultra-violence and groan-worthy jokes found in the original game. You’re the improbably named Lo Wang, a master assassin who dispatches demons, men and demon men alike with the aid of high-powered guns and his trusty katana. This sword, not much use in the 1997 game unless you’d run out of ammo, becomes the star of the show here, allowing Wang to carve his otherworldly foes into tiny bits.

It’s hard to imagine a time when Resident Evil felt stale and in desperate need of reinvention, but Resi 4 breathed new life into Capcom’s series. It’s easy to forget just how bold its ideas were, but this was a zombie game without zombies, and a horror game with a bigger focus on outright action. Made today, the fan reaction may well have been vitriolic, but these changes resulted in one of the best games of the previous decade – one that finally hit Xbox 360 in 2011. While the traditional tank controls remain, to a degree, the perspective has shifted to over Leon S. Kennedy’s shoulder, allowing for freer combat using an assortment of meaty weapons.