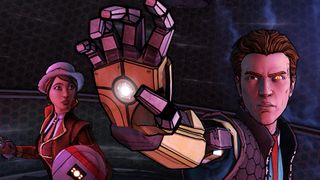 The newly established Telltale Games is apparently working on a sequel to Tales from the Borderlands, the 2014 point-and-click adventure spinoff to Gearbox's looter shooter franchise, according to a new rumour on Reddit.

Tales from the Borderlands was made in a collaborative effort between Telltale Games and Gearbox Studios, set after the events of Borderlands 2, but the former got shut down in 2018 before it could work on any potential second season.

In the summer of last year, however, the Telltale name was acquired by LCG Entertainment and re-established with a mix of new faces and returning staff members, before it was announced that The Wolf Among Us 2, another sequel to a much beloved Telltale title, was back on the cards at the new studio.

Ranking the best Borderlands games, from Common to Legendary

Incidentally, the existence of that game, and Batman: Shadows Edition, was preemptively leaked on Reddit by a user name hereitismydude, who is the same individual stating that Tales from the Borderlands 2 is now in the works at Telltale, with Gearbox's blessing.

The new Reddit post also states that a new entry in Telltale's Poker Night series is also in active development, with plans for crossover appearances from Fortnite, Borderlands, Batman, and more, and will be announced at this year's E3 expo.

As for The Wolf Among Us 2? The leaker claims the sequel has been put on hold, as supporting development Adhoc Studio is still ironing out the beats of the narrative.

While, as always, we should take a rumour like this with a healthy amount of salt, the leaker's previous history reporting on Telltale news does lend it a tad more legitimacy than most, but stay tuned to GamesRadar for any official news from Telltale itself once it inevitably arrives.