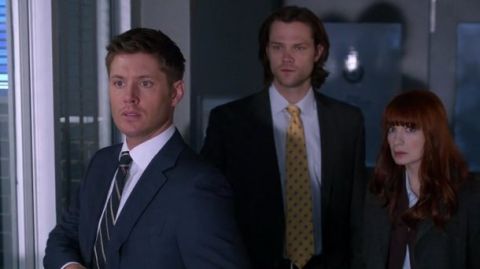 THE ONE WHERE Charlie visits the batcave with a mission for the Winchesters.

VERDICT Supernatural returns from another annoying mini-hiatus with an episode engineered to banish all memory of the CW’s scheduling woes by featuring fan-favourite Charlie Bradbury in a script full of throwbacks to Supernatural episodes past. Needless to say for the latest episode in season GR8, it’s very good indeed.

The plot doesn’t break new ground (nor does it attempt to) but there’s more than enough joy to be had from Dean and Charlie’s chalk and cheese investigative duo, and the zippy dialogue which keeps the story skipping along when the procedural elements let it down. I’ve made no secret of my aversion to Felicia Day’s brand of web eccentricity in the past, but the dynamic she shares with Sam and Dean as Charlie is never less than enjoyably off the wall. Don’t be surprised if she makes plenty more appearances in season nine.

As a gamer “Pac-Man Fever” is a rare-treat – a TV episode with videogame references, and a whole videogame sequence, which won’t make you cringe. Quite the opposite, in fact. The Red Scare section (a kind of Wolfenstein homage) is brief, but fun and has a poignant payoff for Charlie. Speaking of which, what do the writers have against Charlie? For someone with such a sunny disposition she doesn’t half have a tragic life!

Although the episode doesn’t progress the Angel tablet arc, it’s nice that it’s not forgotten about, with Sam still suffering the effects of the second trial. It feels a little too late in the day for the brothers to be swanning about on a case of the week, but a handy “other hunters are on the case” line at the start helps ease any ill-feeling. The more problematic aspect of the plot’s structure is that Charlie brings the brothers a case which helps her come to terms with her mother’s situation while she happens to be hanging round in Topeka, presumably to covertly visit her. Nice idea, but it’s a contrivance too far.

Despite the dialogue highs the script itself falls foul of several televisual tropes (I’m done with flashforward openings) and plot predictabilities (who didn’t see the “doctor is the baddie” twist coming?) which means it plays out as a somewhat plodding procedural, until the dream sequence. And the monster of the week, though a twist on a famous Supernatural foe, still evokes a feeling of “been there, done that”. Not perfect then, but perfectly good fun.

DEAN WISECRACKING
“Man, I'm telling you, give me five minutes with some clippers and...”

CONTINUITY The African dream-root, which Dean uses to enter Charlie’s nightmares, was last seen all the way back in season three, episode 10 “Dream A Little Dream Of Mel”, where a man misused the root to enter other people’s dreams and control them.

SAM’S EXPRESSION OF THE WEEK

REFERENCE OVERLOAD To Kill A Mocking Bird , Wargames , Silkwood , The Bourne Identity , Billy Joel, the Wilhelm Scream, Tron , The Terminator , The Empire Strikes Back and Pac-Man’s kill screen all get referenced this week. Blimey.

FEATURED MUSIC The classical music playing during the pre-title sequence is “Nocturne In E Flat Major” by Frédéric Chopin and “Walking On Sunshine” by Katrina And The Waves returns after soundtracking Charlie’s debut in “The Girl With The Dungeons And Dragons Tattoo”.

DID YOU SPOT? The “Truman Denies Military Experiments” article in the newspaper Dean finds at the beginning was written by a D. Scully.

ALIAS… Hicks and Ripley – the Aliens characters are apt choices for Charlie and Dean’s FBI names given the shoot ‘em up videogame sequence where Charlie acts like a mix between Sigourney Weaver’s xeno-killer and Sarah Connor.

WHAT’S IN A NAME? The alias’ on Charlie’s passports include Christine K Le Guin and Annie Tolkien – both a combination of a Steven King character (forename) and a famous SF author (surname).

TITLE TRIVIA “Pac-Man Fever” was also the name of a 1982 song by Buckner & Garcia.

PIE LOVE YOU At one point Charlie says “I will pick us up some grub, and unlike you Sam, I will not forget the pie.” This pie reference is the latest in a very long running gag (all the way back to episode 1.11 “Scarecrow”!) about how much Dean loves Pie. The Supernatural Wiki has a mind-bogglingly comprehensive list of all the times it’s been mentioned.

THE CAT RETURNS The t-shirt Charlie is wearing before the montage features Lying Cat, a character from Brian Vaughn series Saga .

BEST LINES
Dean: “Why don't you go and talk to the witnesses?”
Charlie: “But I don't want to miss the broment!"