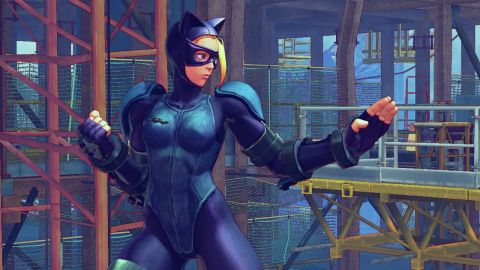 Above: Even a slightly debuffed Makoto can kick (or punch) Dan’s ass (or balls)

The final two were created just for Super SFIV, and both are hellishly fun to play. Let’s take a quick look at both of ‘em, as if you’re still reading these are probably among your chief interests.

Hakan: A bright red Turkish wrestler that has to keep himself covered in oil to put up a decent fight. Once you douse him, his reach greatly extends, enabling you to snatch opponents from a farther distance – an amazing boon for a character who relies on grapples.

Within one minute of playing against or as Hakan you’ll realize how effing silly he is. He squeezes people so hard they splurt out of his arms like a greasy bullet, and his Ultra Combo, well… just check the video.

Right. So, it’s easy to dismiss Hakan as a goof-off character, but Capcom Unity expert and GamesRadar pal Seth Killian has personally vouched for Hakan’s worth, and the tournament star Daigo Umehara appears to haveeyed himas a potential interest. So there.

Juri: A sexy, super-slinky taekwondo master that’s also the series’ first Korean fighter. She’s far easier to understand than Hakan, as all her moves both look and handle like Ryu and Ken – fireball and hurricane kick motions execute similar moves, for example. If you want an enjoyable, accessible but new experience right out of the box, give her a shot.

But, as with all characters, there’s more than the initial impression. Her fireballs can be held until the button is released, and depending on which button you used (light, medium or heavy kick), the projectile will travel low, level or upwards. Highly versatile and tricky, plus her hurricane kick equivalent is an awesome way to juggle and sneak in a few extra hits.

Juri also comes with three different counters, one for each punch button. They, along with her three fireball heights, make each fight a substantial guessing game for the other player. Tons of fun.

My only real issue with these modes is that Ranked Match, where you earn most of your Titles, Icons, Battle and Player Points, is still unreliable when it comes to setting up matches. It’s still easier to play arcade mode and turn on the “Fight Request” option and wait for a link. Weird that this wasn’t addressed.

Above: Endless Battle keeps the winner up top, while losers return to the bottom of the list and watch the matches until their turn comes again

Even when you’re done fighting, addicts will have a hard time breaking away from the game thanks to the new Replay Channel, which hoards and filters the best online matches in easily searchable categories. You can upload your own fights (once certain requirements are met), save lists of your favorites and invite other players to watch replays with you, dissecting each match with detail. You can even turn on the player inputs and watch in slo-mo, if you’re that freakish.

This basically makes your PS3 or 360 a dedicated Street Fighter Channel. With a little luck, the need to watch grainy YouTube clips will fade and this will become the standard way to see the next amazing match. Granted you’ll have to own a copy, so maybe this won’t quite trump a website with a billion unique visitors.