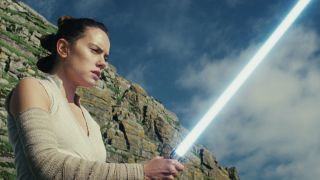 The next era of Star Wars may begin with a game. Two new reports tell us more about Project Luminous, the post Star Wars: The Rise of Skywalker project that Disney first announced at New York Comic-Con 2019 in October, and it looks like a video game could be the flagship of a new collection of books, comics, and more that will eventually lead into the next Star Wars film series.

Project Luminous was announced only with a handful of Star Wars authors attached to the project and this tagline: “The Force is what gives a Jedi his power. It’s an energy field created by all living things. Until… PROJECT LUMINOUS, 2020." According to MakingStarWars.net, Project Luminous will lead directly into a new saga of Star Wars films, which will take place three to four hundred years before the Skywalker Saga - a time reportedly dubbed "The High Republic" era. This will include material from the films that the Game of Thrones showrunners were originally set to lead, though it won't necessarily come as a new trilogy.

Before the first new film arrives, Project Luminous will introduce us to this new era of Star Wars. According to Hungarian fan site Ziro.hu, the first major product from Luminous will be a new Star Wars game set to arrive in 2021. The report makes no mention of what platforms the game will come to or who is developing it, though there's a good chance publisher EA will lead work on the project, assuming it keeps its video game license with Disney. Though sourced independently, the reports from MakingStarWars and Ziro line up.

Star Wars is best known as a film series, but it has a long history of building out its universe through games. Much of the material that first filled out Star Wars beyond the original trilogy came from the lore of Star Wars: The Roleplaying Game, a tabletop RPG released in 1987. Then Star Wars: Knights of the Old Republic established a new, even-longer-time-ago setting for the galaxy far, far away in 2003. It's exciting to think about how a new game could broaden the world(s) of Star Wars even further next year.

Check out our Star Wars timeline to see where Project Luminous may fit in to the bigger picture.