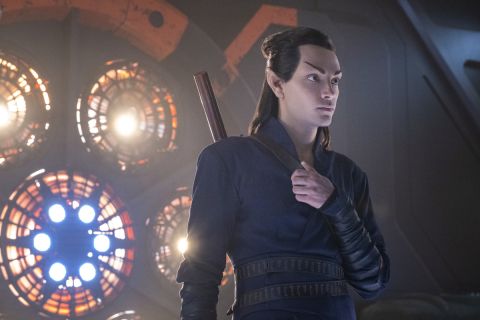 Jean-Luc Picard may have rediscovered his old Next Generation self, but the rest of the galaxy is still playing catch-up. If you’d assumed that standing up against Starfleet must have turned him into a hero among Romulans, well, it turns out they’re not fans of his past work either – in 2399, everybody hates Jean-Luc.

But – perhaps appropriately in an episode entitled “Absolute Candor” – the unexpected takeaway is that the naysayers could actually have a point. Picard was clearly trying to do the right thing when he quit Starfleet to protest their abandonment of Romulus, yet – as Raffi hinted in episode three – the general scepticism concerns what he did next. “Because you could not save everyone, you chose to save no one,” says one Romulan, while another counters Picard’s claim that “I did everything I could,” with a hell of a takedown: “And then you gave up.”

We’re not used to seeing Jean-Luc Picard quit anything, so this is yet more new territory for the character in a show that’s making a habit of transporting him light years away from his comfort zone. In Patrick Stewart’s most impressive – yet understated – performance of the series so far, he expertly conveys the inner conflict of a great man whose life has taken a totally unexpected course because of events (mostly) beyond his control. As with the death of Data, the fate of the Romulans has left him wracked with guilt, yet there’s also the inescapable feeling he could have done more to help had he stuck to his guns.

From having the whole of Starfleet on his side in the old days, it’s becoming increasingly clear the older Jean-Luc has few genuine allies left – and that’s a brave storytelling decision when you’re dealing with a figure as beloved as Picard. In fact, the character beats in this episode are strong enough that it’s – just about – possible to forgive the script’s trips into info-dump territory that plagued “Maps and Legends”.

If Star Trek: Picard’s three main narrative arcs involve Data, the Borg, and the Romulans, “Absolute Candor” has its feet firmly in the latter camp. Picard forces his new ship La Sirena into an unexpected detour to Vashti, a world inhabited by a mix of humans and Romulan refugees, and is surprised by the poverty and “racial strife” he encounters.

A flashback reveals how different things were on his previous visit to a then-prosperous world. Back then he was still a Starfleet admiral (albeit one with a rather natty safari jacket – Roger Moore, eat your heart out) working on plans for the Romulan evacuation. He’d also befriended an emotionally frank caste of warrior nuns (and sworn enemies of the Tal Shiar) known as the Qowat Milat, while developing a strong paternal bond with Elnor, the only male in by the order.

It’s strange to see Picard, traditionally so stand-off-ish with kids on the USS Enterprise, so relaxed in the role of a father figure sharing stories of The Three Musketeers and Data’s pet cat, Spot. And yet it feels totally right from a canon point of view – Star Trek: Generations dealt with Picard’s grief after the death of his nephew, Rene, and it subsequently manifested in the form of a fully formed family in the alternative reality of the Nexus. It makes total sense that in the years since he left Starfleet his priorities would have shifted.

On the present-day Vashti, Romulans and humans now live a segregated existence (insert any number of relevant political allegories here), and Picard is something of a hate figure, so much so that a former Romulan senator confronts the old man and challenges him to a duel. Luckily for Jean-Luc – traditionally a strong swordsman, but now in his nineties – the grown-up Elnor assumes the mantle of bodyguard, decapitating the assailant in brutal, green-blood-spilling fashion.

We’ve seen enough in Picard’s few scenes with Elnor to suggest that he’ll be a worthy addition to Jean-Luc’s unconventional crew. As well as supplying some much-needed muscle, he’ll bring a much-needed element of naivety, and a youthful counterpoint to Picard’s struggles with the ageing process. There’s also tension there thanks to Elnor’s belief that Picard abandoned him as a child – and that he only came back to Vashti because he wanted something from him.

While it’s still early days, the crew of La Sirena is starting to feel like a unit – Raffi is a compelling cynic, while Dr Jurati is evolving beyond her original “supplier of exposition” role to bring some much needed comic relief. Indeed, she could well be the first character in Star Trek history to complain about space being “super boring”. We’re also introduced to two more of Chris Rios’s emergency hologram clones, and we have to say the jury’s out –  the gung ho weapons expert is plausible, but what sort of emergency would ever require an artificial hospitality expert? The holograms remain fun, but the writers are straying dangerously close to turning them into a joke; when we start seeing the emergency stand-up comedian, we’ll know they’re jumping the shark.

Over on the Borg Cube, Soji and Narek’s blossoming romance has reached the stage of intensive, borderline paranoid research into the other’s activities. She’s cottoned onto the fact that he knows a lot more than he’s letting on, and may have access to information in the Borg databases about the fate of the Shaenor, the only Romulan ship assimilated by the Collective. Meanwhile, now that Narek’s worked out Soji could be the mythical “destroyer”, he’s planting ideas in her head that she may not be exactly who she believes she is. The question is, will Narek get the answers he needs before his scary sister eliminates Soji.

If those Borg encounters were relatively uneventful, there is another member of the Collective who’s definitely set to make waves. The episode saves its biggest reveal for the end, when Star Trek: Voyager veteran Seven of Nine is revealed as the brilliant pilot who saves La Sirena from a rogue Bird of Prey. The initial, pronoun-heavy assumption that said pilot must be male feels out of date in 2020, let alone 2399, but it’s good to have Voyager’s most memorable character back in action. We’re looking forward to seeing how Picard is going to pay back the ship he owes her…