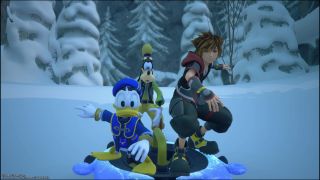 Kingdom Hearts 3 was released at the start of this year on January 25, 2019. Its DLC is still scheduled to release sometime this winter which – given it's already December, of course – means it's unlikely to drop this calendar year. But beyond a teaser shared month ago, we'd heard little more… until now.

As fans gathered for the full-orchestra treatment for Kingdom Hearts 3's stunning original score, attendees of the show in Osaka, Japan, were also treated to a few tidbits a bou what's planned in the upcoming DLC.

Following the roll-out of Kingdom Hearts 3's critical mode, it seems there's a load of other modes on the way, too, including a photo mode, slideshow mode, fast pass mode, and, perhaps more intriguing of all, "black code". While the first three are fairly self-explanatory, the latter will reportedly let "you tweak the difficulty to extra hard including choosing how much health you have".

"The example battle was against Marshmallow in Frozen world," explained Twitter user Melanie (thanks, Resetera), who was there at the show. "The demo player had to constantly block his swiping attacks and had no way to heal (used a kupo coin though)."

"Photo Mode allows you to pose any of the game's protagonists (and even antagonists in one hilarious example photo) in your chosen setting with props and background effects. Example props included a giant pancake, sparkles, a Dusk, and dream eaters," Melanie added.

"Slideshow mode lets you take the photos you've created and add background music, transitions, zooms, and create a slideshow. The example photos were hilarious and showed an incredible range of possibilities.

"Fast Pass Mode and Black Code allow you to change difficulty settings," Melanie added. "There were too many potential settings, went by so fast, but Fast Pass Mode lets you essentially one-shot kill enemies and had at least 7 attractions / spells stacked up above the combat menu."

There was also confirmation that a new Re:Mind DLC teaser trailer will drop in the next few weeks, although director Tetsuya Nomura wouldn't be drawn on when the DLC might finally roll out just in case "people [got] mad at him".

Still getting stuck into the adventure with Sora and co.? Check out our nifty Kingdom Hearts 3 tips to help you take on the heartless.