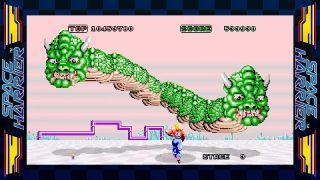 Enhanced versions of Space Harrier and Puyo Puyo will be added to the Sega Ages collection of retro Sega games on Nintendo Switch August 22. Both games will be available via the Switch eShop for $7.99, boasting different additional features that should attract long-time fans and newcomers alike.

Space Harrier will include a new mode called Komainu Barrier Attack, which gives you a barrier to start with that plows through obstacles but disappears if you get hit just once. The new feature should help newcomers to Space Harrier acclimate to the game's fairly steep learning curve.

Sega Ages ports are being developed by M2, who is also in charge of emulating classic Sega games for the upcoming Sega Genesis Mini console. Puyo Puyo and Space Harrier will bring the total number of games in the Sega Ages series on Switch to 10, with some of the highlights being the original Sonic the Hedgehog, Virtua Racing, and Phantasy Star.

Other announced titles without official release dates are Sonic the Hedgehog 2, Puyo Puyo 2, and the cult-classic arcade ninja hack-and-slasher, Shinobi. Sega has also confirmed that Sega Saturn and Dreamcast games will be making their introduction on Nintendo Switch as part of the Sega Ages collection, so that's super exciting.

Sega also just dropped a trailer for Super Monkey Ball Banana Blitz HD and it's everything you need to kick off the weekend.