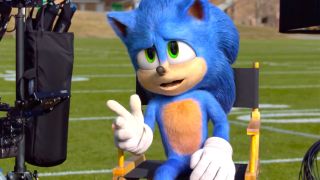 The Sonic movie has had a fair few roadblocks put in its path – but it’s finally here. And director Jeff Fowler couldn’t be happier with how things turned out in the end.

GamesRadar+ recently had the chance to speak to Fowler about a variety of topics. Most notably, why he didn’t approach Sonic the Hedgehog as a video game movie, what he wants to see from a sequel, and what it’s like directing comedy legend Jim Carrey (who plays Robotnik).

Fowler, a fan of the Sonic games, even opens up on his favourite Easter eggs and tributes to the series, and reveals which video game franchise he’d like to see given the movie treatment next.

GamesRadar+: It’s fair to say video game movies have a bit of a mixed track record. How do you think Sonic succeeds where maybe others haven’t?

Jeff Fowler: I certainly did not approach this in terms of adapting a video game for a film. Because I think that might be getting off on the wrong foot. I just really looked at Sonic as a character, like 'What do people love about this character? Why is he so popular and successful 30 years after he came out?' and just taking all those qualities and attributes of the character and really building a great story around him for a film.

You were refreshingly open and honest about having to redesign [Sonic]. When did you realise personally that you might have to quite literally go back to the drawing board?

It was pretty clear on the day the trailer was released just seeing the feedback and hearing the feedback and being so unilateral that fans were not happy enough with where we were at. The message was very clear. In a situation like that, it was very little discussion – we just knew that that work had to be done. We just rolled up our sleeves and dived in.

In terms of the redesign, what is maybe your favourite aspect?

There are probably multiple things. I would definitely say the end result and to see fans embrace the work in the way they did with the second trailer was just fantastic. I mean, that was the best possible outcome as there was certainly no guarantee on the second time around that they would respond the way they did and for it to be positive, and that supportive was just amazing.

Jim Carrey plays Robotnik. The actor was ubiquitous in the ‘90s, but less so now. How did you bring him on board?

It was a moon-shot. It was like, ‘Oh my god, what if we went out to Jim Carrey about this?’ He’s one of the greatest comedic talents of our time and such a smart, talented actor. I sat down with him and had a great discussion, pitched him on what our plans were for Sonic, talked to him about Robotnik.

He just got this little twinkle in his eye, the idea of playing this character, this megalomaniac with the IQ of 300 really appealed to him. It felt like he really responded to it which was amazing.

The great thing about Jim is he just has so many ideas. We had so many discussions, even prior to filming, where he would pitch ideas, we would talk about wardrobe and costuming and he just really wanted a part in every aspect of the character which is great because it created such a collaborative experience.

Every single scene he would show up with ideas and pitches for dialogue tweaks or little ways to block the scene, or how to interact with the other actors. He made every single scene better, truly. He was a joy to work with.

In a similar sort of vein, what did he bring to the role that maybe you didn’t expect?

A lot of just, obviously, the humour. On the page, he was very funny, but he just found a way to take it even further. The relationship with Agent Stone is a perfect example where, on paper, it was amusing, but what Lee Majdoub, who plays Agent Stone, and Jim were able to work out was so much fun. Every day they had a scene together they were just workshopping it and talking about how… we could make it better. It ended up in such amazing and fun territory.

The hybrid between CGI and live-action has been given increased prominence recently due to Dolittle, The Lion King, and others – what's are the challenges of directing one of these films that perhaps the audience wouldn't realise?

You probably do recognise it. When Sonic is in a scene, he’s not physically there.

I’ve seen you have stand-ins

That’s certainly helpful in terms of providing eyelines for the actors. Coming from the world of animation, one of the ways I was familiar with working was storyboarding and generating a lot of temporary material that we would generate and add scratch audio to.

I could hand an iPad to James Marsden and show him what the scene was in rough sketch form and we would watch it together and talk about it. So, he would have an idea of what the scene was then we’d sit down to shoot it. I think he has that mental information and can sort of craft his performance around it. That’s much easier than looking at a tennis ball on a stick. He knows what the content of the scene is and can craft his side of the performance accordingly.

What's your history with Sonic, the video game series?

I was 13 in 1991 when the first game came out, and I was literally playing every game I could get my hands on. Sonic just stood out in the most amazing way. It was such a fast game, but just the art design of it was incredible. Then, just as a character – you didn’t see characters that had swagger like that. Just in that little moment with Sonic, if you didn’t touch the controller, he would do his little toe tap, break the fourth wall, and look at you. There wasn’t anything like that. It just stood out in the most incredible way and I truly believe that’s why he’s been around for 30 years. People just responded to his character.

How do you think those experiences inspire and influence the movie?

It’s a direct inspiration. Ben Schwartz, who voices Sonic, and I had really great conversations about how to bring Sonic to life for the film and imbue him with this spirit, this energy, this excitement, this over-caffeinated kid; fast-talking, just loves Earth, has a great imagination and is just running all over the place in a really fun way.

I noticed a few Easter eggs and callbacks to the franchise – did you have a favourite yourself?

You know, one of the last ones we did which I love because everyone saw it in the second trailer we did was the little nunchuck scene and [Sonic] is wearing a headband.

Dream scenario: if you were handed the keys to the franchise, where would you want to go next with these characters?

Well, opening it up and bringing in more of the characters that fans would love to see. In designing this film, the best approach was to go back to 1991 and that first game: Sonic vs. Robotnik. Then, in terms of the lineage of the movies, you could look at what they did with those early games and that provides a great blueprint for future stories.

If you had a choice to give a video game character the movie treatment – who either has before or hasn’t already – who would you choose?

Outside of Sonic? Oh, that’s tricky. There’s a lot of really cool stuff out there. I love Legend of Zelda and that world. There are still some amazing games being created for that franchise. There’s a lot out there, but for now I would love to keep making Sonic movies!