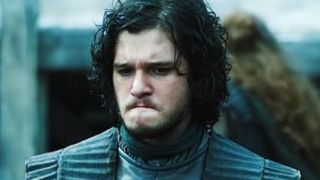 Game of Thrones is no stranger to having famous faces turn up from time to time with Richard E Grant, Snow Patrol’s Gary Lightbody and even creators David Benioff and D.B. Weiss popping up for cameos in Westeros, but a few A-listers are going the extra mile to get a role in the hit HBO show.

Casting director Carla Strange has had a stack of bizarre gifts and letters in an attempt for celebrities to get in on the action. “We get really strange things and letters and emails from people trying to get our attention,” Strange told UK newspaper The Independent. “One person sent playing cards where every playing card has their face on it doing a different emotion. Really classy.” Oh, we really want to know who has a deck of playing cards with their face on every card.

And it doesn’t stop there. Strange revealed more about what has been sent by the (annoyingly) unnamed A-listers: “Someone even sent me a Stormtrooper with a sticker of themselves on it. I’ve had people send Kit Kats. You get very random things in the post.” Here's theory: Daniel Craig was happy to appear in Star Wars The Force Awakened as a faceless Stormtrooper, maybe he'd be just as happy with an anonymous Thrones appearance?

While we wouldn’t want to be the casting director’s postman, we are curious as to who might turn up in the final seasons of Game of Thrones. Unfortunately, it sounds like the best efforts of some stars may be in vain, “The stars generally go to the producers directly but then they have a hard time trying to figure out where to put them. There are only so many cameos that you can have!”

We’ll be eagle-eyed in anticipation of any cameo appearances that may crop up during Game of Thrones season 7.