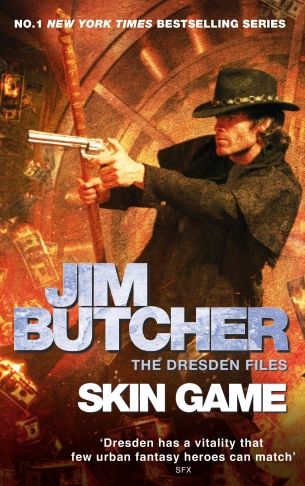 Dresden Files fans worried that the last book, Cold Days , meant Jim Butcher was taking the series in the direction of epic fantasy will be reassured by Skin Game . Without forgetting everything he’s already experienced, Harry Dresden finally seems to be shedding some of his angst, and is learning that his powers have some serious limitations, making him more like the wisecracking PI of the earlier novels.

“Skin game” is American slang for a dodgy operation, and the story sees Harry, in his role as Winter Knight, loaned by Queen Mab to old enemies the Denarians (humans possessed by fallen angels) to help rob a vault. He doesn’t want them to achieve their aims, he doesn’t like several of the other people the Denarians are employing and the whole thing is further complicated by the fact that the vault is in Hades. But the greatest moment involves nerdy Waldo Butters - if you thought Dead Beat ’s animated dinosaur skeleton powered by Butters’s one-man-polka-band was impressive, wait until you’ve read about his latest trick.

It’s a thoroughly enjoyable adventure, despite the story’s apparently straightforward nature. Throughout The Dresden Files , Butcher has proved himself adept at working little details into each novel that only become significant in later books, and this volume is doubtless littered with them. Forget the shapeshifters, double-crossers and manipulators here – Butcher is probably pulling off the greatest Skin Game of all.