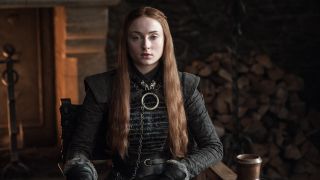 Without hyperbole, Game of Thrones season 8 is going to be one of the most closely guarded events in pop culture history. The final six episodes are pretty much under lock and key but, as Sophie Turner (AKA Sansa Stark) reveals, it’s actually a lot more drastic than that – and it sounds like something out of a spy film.

Ever heard of Face of Angels? No, me neither. But it’s the codename Game of Thrones went under during its recent filming. Turner tells Esquire it was “a random [codename]” without any implicit meaning (so don’t go looking for one), but the weirdness doesn’t end there.

“No-one knew who was really going to be on set," says Turner, as actors were also given codenames to hide their presence. I’m beginning to sense that HBO were just a *little* paranoid about leaks, don’t you?

But that’s without mentioning the scripts. Oh, the scripts.. No physical scripts were allowed – have they not heard of a shredder? – and actors were under extremely tight restrictions on even rehearsing their scenes, as Turner reveals.

“We wouldn't get anything physical. We would have it on an app. We would get sent sides for the scene [we were shooting] the next day. So, we would have to learn it all the day before… And once you've read it, it disappears 24 hours later, and you can never access it again. It's tighter than the White House security!”

That is… utterly, utterly bizarre. If you think some of the actors look a bit rusty on-screen come 2019 then, well, that’s because they’ve had less than a day to learn, perfect and deliver the most iconic lines of their career. No pressure, eh?

Still, at least Game of Thrones season 8 spoilers are going to be kept to a bare minimum. I hope.

Despite all the precautions put in place, that hasn't stopped a few of the cast from getting a little chatty when it comes to the Game of Thrones ending...