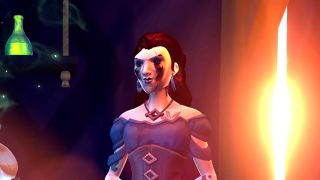 Sea of Thieves may let would-be buccaneers return to the high seas or take their maiden voyage in an upcoming open beta. Reddit user vJoeyz went looking through new files recently added to an insiders-only version of the game and dug up some treasure: multiple references to quests and other content for an unannounced open beta. It appears it will let us lend our cutlasses to the Order of Souls, an in-game faction that was absent from January's closed beta.

Unlike the Gold Hoarders, the Order of Souls is uninterested in riddles and buried booty. Rare previously revealed that this faction will hand out bounties for the skulls of powerful NPC skeletons, so you can expect quite a bit more fighting when you take on work for them. That should help with complaints about a lack of mission variety in the closed beta. I perused the manifest file that vJoeyz posted, and it looks like Rare may be holding the Merchants' Alliance faction back from the open beta - or perhaps more of their stuff will come in a later update.

Other new features spotted in the update include - spoiler warning if you prefer to find out about this stuff officially - more pirate customization tweaks (including the all-important "Dirt" option) new effects for fighting a kraken, blueprints for hideouts, and more levels of difficulty for skeleton foes. Can't say yet how much, if any, of that stuff could appear in the open beta - Rare has been careful to leave much of the game mysterious ahead of its release date - but it all sounds good so far.

You had to either pre-order Sea of Thieves or belong to the game's insiders program to get into the closed beta, so an open beta would be a chance for everybody else to give it a shot. Given how popular the game was on Twitch, and how many excellent Sea of Thieves highlights the closed beta generated, it could also be a serious stress test for Rare's online infrastructure.

We've reached out to Rare to ask about the open beta references in the game files, and I'll update this story if and when the studio gets back to us.