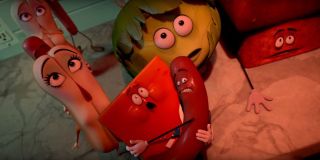 Sausage Party is the adult alternative to Pixar's family-friendly content. Sure, we've seen shelves of cheerful food items dreaming of a life beyond the supermarket in the recent green-band trailer, but make no mistake. This ain't for kids. Once those delicacies leave the grocery store for the Great Beyond, their lives take a brutal - and very funny - turn.

That's exactly why this newest promo is a slice of genius. Sausage Party creators Seth Rogen and Evan Goldberg know that animation is Disney's terrain, and with a cheeky parody film in the can, what do they do? Spoof the hell out of the studio. Rogen dresses up like Walt Disney, saunters around his "Animation Imaginatorium" and chats to his leading man, a hot dog named Frank. Check it out:

My Animation Imaginatorium has cooked up up a new movie called "Sausage Party". Check it out: https://t.co/IvgfPHwWLTMay 23, 2016

This mix of parody and vulgarity with a dash of spoof is a unique beast, certainly, and will appeal to fans of Rogen's trademark brand of irreverent humor - me included. In light of Deadpool's R-rated success story, I expect Sausage Party will be cruising into multiplexes with hopes of achieving the same.