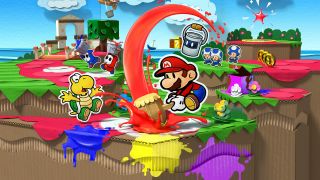 The Nintendo Switch will get both a new Paper Mario and a 2D Metroid game in 2020, according to fresh rumours from prolific industry leaker Sabi.

Teasing the news on Twitter, Sabi said that Paper Mario will be "going back to how it was" in 2020, suggesting a return to the franchise roots for the plumber's role-playing spin-off series following 2015's Mario and Luigi: Paper Jam on Nintendo 3DS.

Additionally, the leaker claimed that a new 2D Metroid game (not to be confused with Metroid Prime 4) is also in the works for a release later this year, and "does in fact seem to be related to Fusion", the Gameboy Advance title in the acclaimed sci-fi series from 2002. When pressed, Sabi stated their sources have suggested this project is a sequel to that game.

Can we trust these rumours? Not without more proof, sadly, but this Twitter account has a pretty strong track record when it comes to pre-empting Nintendo's own announcements ahead of their official marketing schedule, so we can't dismiss the claims outright.

Hopefully, we'll hear something more formal from Nintendo itself soon. The company only recently held a Pokemon Direct livestream dedicated to all things Pokemon Sword and Shield, but - as E3 looms ever closer - we've no doubt that Ninty has some big projects planned for 2020.

Check out the biggest new games of 2020 and beyond still on the way this year, or watch the attached video below for our latest episode of Dialogue Options.