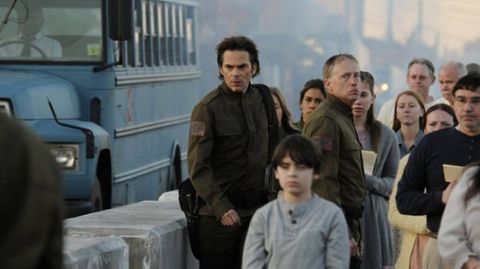 Revolution 1.14 “The Night The Lights Went Out In Georgia” TV REVIEW

THE ONE WHERE Rachel and Aaron visit friends for lunch and exposition, while Miles and Charlie stop a nuke going off, all in a days work.

VERDICT Revolution has always been interesting, if never quite amazing. This week throws in new places, faces and a new twist to the power problem, but still lacks a bit of steam-powered umph to make it into awesome territory.

Crossing the border into Georgia, Charlie and Miles go looking for Monroe's pendant-powered nuclear device, a bomb he plans on detonating to bring the more affluent state under his control. They are Greeted by a steam-powered bus and motorcycle which, according to Miles, are “just for starters”, as he explains Georgia is very different territory compared to the dirt and warehouses of Philly. Indeed, it's refreshing to have a change of scenery; Revolution was getting very, er, brown and Georgia looks more like a city, complete with its own female president.

It's a shame, then, that such a high stakes story – finding and defusing a nuclear device in a new city – feels played out on a relatively small scale and resolved so quickly. Miles finds a knife in a raided house, it's a knife he once owned that he gave to a pal from his militia days, who in turn we discover is the chap tasked with delivering and detonating the backpack-sized nuclear payload. Miles relays the story to Charlie and in flashback we meet Alec, learn how the knife was gifted and how the men fell out. Actor Billy Burke again does a great world weary “rebel with a heart”, but still never quite convinces when depicting his younger, crueller self as a leader of the Monroe/Matheson Miltia.

Scouring the city undercover, Miles, Nora and Charlie use flash lights as detectors to locate the pendant, which is a neat trick but you can feel the show straining at its budget to show a broader world. There are a couple of nice wide shots of the city of Georgia to give a sense of scale, while a quick-cut chase through a bustling marketplace gives a sense of urgency, but without a healthy suspension of disbelief it's evident that we're seeing a mere street or two, not a whole city, and that the action is taking place in the practical economy of interiors and alleyways.

Rachel and Aaron continue their journey to Colorado the find “The Tower” research facility where the blackout started. On the way to switch the power back she's goes looking for a friend who lives off the beaten track in a creepy wood who could help. Rachel's scientific friend Jane, however, isn't that keen to lend a hand. She is, though, prepared to introduce the term “nanites” into conversation, the technical term for the dust-sized machines controlling the electrical field which was missing from last week’s exposition bomb. Jane reveals to Rachel there's a personal downside to turning off the nanorobotics.

“The Night the Lights Went Out in Georgia” is another step forward in the direction of this half season. Particularly interesting is the new power base of Georgia, President Kelly and her desire for Miles to take up arms again, introducing a welcome new dimension to the fight between Monroe and the rebels. Other aspects are not so clear, with the nature of the power outage now revealed, it's inevitably become a little less mysterious and exciting, but with a bit of scope for unknown technological advancements like a the microwave gun, this is the future after all, there's still room for surprises.

NANITES Nanites have been in loads of sci-fi. Wesley Crusher had some in Star Trek: TNG “Evolution”. Skinner in The X-Files was poisoned by them. My personal favorite was Grant Morrison’s run on DC’s Doom Patrol where Robotman saved the world from a swimming pool of nanites with the help of a sentient teleporting street – it all got a bit existential.

As they are programmable “cells” they can do pretty much anything, and here lies the rub with Rachel.

The nanites aren't just in the air but can be injected into in the bloodstream to fix all manner of serious illnesses. Remember the flashbacks of Danny as an ill child? Ben and Rachel speaking of an experiment to heal him, then when Danny died Rachel was seen removing a tiny device from under his skin? It's a satisfying payoff to plot threads laid in previous episodes; turns out the nanites were fixing Danny too, as they have been with other people. So suddenly there’s a whole new moral aspect to turning the power back on by turning the tiny machines off.

Living out in the woods, Jane's partner Beth also has the nanites inside her keeping her alive, so it's clear why she's not helping. Rachel persists and when it's revealed how high the stakes are for everyone, Beth is willing to help despite the outcome for herself.

RED SHIRTS Well they're not actually red, but Sebastian Monroe doesn't half loose a lot of his militia men in the field. Take the two chaps this episode that pop up in the creepy wood, surely well off track of their normal patrol route, both wearing “M” shirts. I'm not saying Revolution hasn't killed off members of its cast in dramatic and surprising ways in the past, but so quick are these ne'er-do-wells to attack Rachel and Aaron it's almost impossible to disguise them as anything but screen fodder. Within minutes both have been microwaved into giant pork scratchings.

UNFORTUNATE VICTIM OF THE WEEK Bass Monroe is probably a bit ticked off that in recent weeks he's been reduced to short moustache-twiddling scenes. If he doesn't get something more to do soon he'll probably run off and start tying women to train tracks. So who's this guy talking to him who we've never met? He's Tom Neville's most trusted aide and he's full of intel on our runaway general. He reveals to Bass how Tom has gone AWOL and that Tom's son is still alive and working for the rebels. Not a good day for bad news. Still, don't shoot the messenger, eh? Oh nevermind.

Read our other Revolution reviews

• Have you started making use of the SFX TV Reviews Index yet?