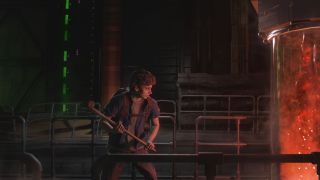 The Resident Evil 3 remake has been the talk of the town since it was confirmed during the 2019 State of Play. Capcom also confirmed that Project Resistance, the asymmetric multiplayer spinoff we all thought was going to be a standalone game, will be called Resident Evil: Resistance, and will be included in the remake. Now, they're just adding to the hype, dropping information on one of the Survivors you'll be able to play as in Resistance: Martin Sandwich.

Meet Martin Sandwich, one of the Survivors in Resident Evil Resistance, a 4v1 asymmetrical multiplayer game included with Resident Evil 3.A skilled engineer and mechanic, Martin can create traps to slow down or stun enemies. #RE3 pic.twitter.com/89a7hsC1bEDecember 11, 2019

According to the tweet, Martin Sandwich is "a skilled engineer and mechanic, who can create traps to slow down or stun enemies." His amusing last name is also apparently related to Jill Valentine - in the original Resident Evil, Jill is rescued by fellow STARS member Barry Burton just moments before she's crushed to a pulp by a trap. "That was too close," Barry tells her, "You were almost a Jill sandwich!" Eeesh.

Capcom rewrote the Dad joke for the Resident Evil remake, swapping in the not-very-much-better line, "A second late, you would have fit nicely into a sandwich." The studio has clearly embraced the awkward line, adding a Jill's Sandwiches restaurant in Dead Rising, and now naming a main character Martin. Sandwich.

No word yet on whether or not Mr. Sandwich's surname will be the butt of any Dad Jokes in Resident Evil: Resistance, or if perhaps he'll hang up his trap-making hat and replace it with a Subway visor. We do know that he'll join Becca, January, Samuel, Tyrone, and Valerie - all of whom have fairly run-of-the-mill last names.

The Resident Evil 3 remake will drop with the Resistance multiplayer mode on April 3, 2020 on PS4, Xbox One and Steam, so get ready to meet Martin Sandwich. Is anyone else hungry?