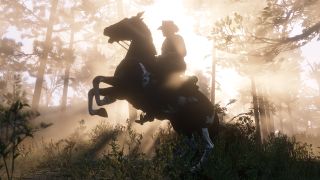 Ever full of surprises, Red Dead Redemption 2 has already given us Bigfoot and a KKK massacre, but the latest find will be of special import to those who've played or kept up with developments in the original Red Dead Redemption.

But first, a short history lesson for context. On May 22, 2010, a YouTube channel called WhereDaBootz uploaded a video entitled "The Incredible Donkey-Lady!", which hilariously showed off a Red Dead Redemption glitch in which the body of a female NPC had morphed with that of a donkey. The short but unforgettable two minute clip, which you can watch below, quickly went viral.

Obviously, Rockstar had never intended to include a rideable human NPC with a donkey's face in Red Dead Redemption, and this amazing glitch was clearly the brilliant result of an algorithmic hiccup in the game code. Still, Donkey-Lady has since become synonymous with the franchise as one of the best glitches of all time, up there with Skyrim's necrological wedding ceremonies and the skeletal horror shows found in Assassin's Creed Unity's .

And, judging from a newly discovered Easter egg in Red Dead Redemption 2, Rockstar has finally embraced Donkey-Lady full heartedly. That's right, she's back, but not in the way that you remember her. Before we go any further however, it's worth noting that the video below does contain major spoilers for Red Dead Redemption 2, so do continue with caution.

Completed the campaign? Good, now we can show you the Easter egg in all its glory. The Donkey-Lady can be found at a place called Two Crows in the Austin section of the Red Dead Redemption 2 map, South of Armadillo, and you'll find her skeletal remains tied to a horse mill, as the video from Bubski below demonstrates.

She's dead, and no longer rideable, but that's definitely the Donkey-Lady alright. Same clothes, long face, and everything. Upon discovering the half-human, half-ass hybrid, Arthur writes in his journal: "What was this poor thing? Who would do such a thing to any creature?". Uh, last I checked, it was you, Rockstar, who created this particular monstrosity. Own your mistakes, damn it.

While I'm kind of upset that Donkey-Lady isn't an official mount to be ridden across the landscapes of Red Dead Redemption 2 just like in the first game, this is definitely the coolest, cheekiest Easter egg players have found so far, even if everyone's favourite Wild West mutation is now nothing more than a pile of bones and rags. Farewell, sweet Donkey-Lady, you're in a better place now.

For more Red Dead Redemption 2 tips, check out all the things we wish we knew before playing.