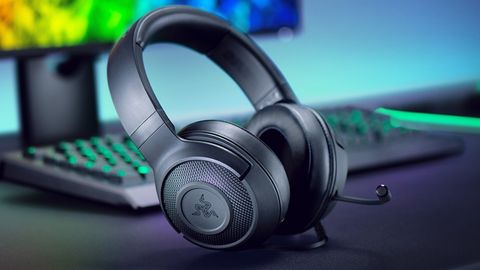 An affordable addition to the Kraken line that falters due to its non-detachable mic and flies with superb 7.1 surround sound on PC.

"If it ‘aint broke, don’t fix it". That’s how the saying goes, right? Well, Razer’s been ignoring that piece of advice over the last few months with reimaginings of their best-known peripherals. We got the redesigned Razer BlackWidow keyboard earlier in 2019, and now it’s the Kraken headset range’s turn. Alongside the new and improved Kraken comes the Kraken X, a cheaper alternative. It joins the Razer Kraken Tournament Edition too, which sits at the top of the range. Not confusing at all. Importantly, though, does it carve out a space on our best PS4 headsets list or best Xbox One headsets guide? Although it’s not perfect, this new offering is definitely worthy of the Kraken name.

The X holds on to that classic Kraken design even as it smooths over a few edges; rather than twin bars connecting the headrest and body as per its predecessor, this version gives the illusion of a continuous loop. While this is a sleeker look that’s more evocative of non-gaming headsets, it’s also somewhat plainer. Which is only appropriate, I suppose - the X is a cheaper alternative to the Kraken-proper.

There’s less fabric at play here, too. Other than a pleather cushion at the top, this headrest is entirely made of plastic. The distinctive mesh effect and comfy leatherette earcups have stayed put, though.

Despite being at the lower end of the scale at $50 / £50, the Kraken X offers some cool features. At just 250g, it’s very lightweight and provides "a near-weightless feel on your head" according to the marketing blurb. This is accompanied by memory-foam cushioning with eyewear channels, positional audio, onboard audio controls, and a built-in microphone that’s flexible but permanently attached. It's topped off with downloadable 7.1 virtual surround-sound that’s available when you’re using the headset on PC. Simply turn on a desktop app and away you go.

As per every model in the Kraken line, the X doesn’t disappoint. It balances sharp, clear highs with rumbling lows, and the positional sound is pretty good as well. Yes, the latter’s unsubtle (audio is dumped entirely onto the left or right ear the moment you turn away, for instance) but it’s not bad for an affordable headset. It’s easy to fiddle with the volume and/or activate the mute button via on-board controls, too.

The issue is that microphone. A flexible cardioid affair, it’s powerful (almost too powerful, according to those I tested it with - they could hear everything in the room around me) yet isn’t detachable. While that’s hardly the end of the world, it’s a nuisance nonetheless because it limits your options. Using the X to play music on your morning commute would look odd, for instance. Not that you’d want to. The X’s plastic seems easily scuffed, and the leatherette gets a bit sweaty in use.

However, it’s comfortable. Like, really comfortable. I could sit with this thing on for hours, and you’ll want to if you’re using the Kraken X on PC. Its 7.1 virtual surround sound app transforms your experience for the better. Although the X was good before, now it’s on another level. Alongside richer audio and a greater depth of sound, the surround is more subtle and immersive as a result. I just wish this feature was available for consoles.

Is the Kraken X worth it? Generally speaking, yes - especially if you’ll be using it on PC. While there’s an argument to be made for saving up and grabbing the superior Kraken Tournament Edition instead, this is still one of the best PC headsets for gaming we’ve gotten our hands on. There’s a lot to like here, and you can be guaranteed a sense of quality you won’t always find in other gaming cans.

An affordable addition to the Kraken line that falters due to its non-detachable mic and flies with superb 7.1 surround sound on PC.