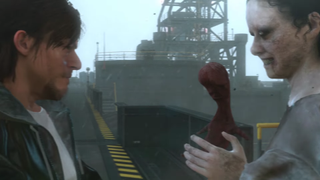 File this one under 'cannot unsee' but YouTuber Lakitouille has decided to reunite P.T.'s Norman Reedus and the ghost, Lisa, via the medium of dance.

Because why wouldn't you?

The character's he used were pulled out of the game in this discussion . Here's the Norman and Lisa models, as well as the chicken baby, if you want to see them. These were obvious finds, seeing as they were front and centre in the demo.

However, there were also these two creatures which haven't been seen before. A taste of what could have been if Konami hadn't canned the game?

Nothing else has been unearthed so far and it looks like that was all the P.T. demo had hidden away. For now, then, we just have those two unexplained creatures and this shower scene that will haunt your dreams from here on in.

I think Norman's face is an accurate summary of how we all feel.