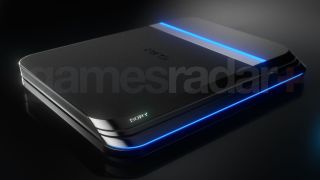 The PS5 design is something that PlayStation still hasn't revealed, so whereas we know what the Xbox Series X now looks like, the PS5 is a mystery. Thankfully, we know some things about Sony's next-gen console, including some of the upcoming PS5 games, the logo, and features like haptic feedback, we have no idea what the PS5 design will be. You know, what the box that'll be sat under your TV for the next five or so years will look like.

Until Sony officially reveals the console, we're turning to the internet, to see what the most plausible concepts are out there. We're ignoring anything that's totally crazy, like a mad floating ball, or one that turns the PS5 into a rollable screen with half a controller attached to either side. Let's be realistic here folks.

Our lovely visual effects chap literally made it up from his creative brain, so it's hard to validate how plausible the design will be. But, we're thinking that the PS5 design may not deviate too much from the PS4, and the consoles that have come before. After all, Sony has been carefully refining its black box since the PS2 back in early 2000, so this may not be too far from what we eventually see.

The Made in Dreams one

My PS5 concept inspired by the leaked dev kit. Had to make another small tweak no one but me will ever notice. I love Dreams.Anyone have any requests for sculpts or suggestions for this sculpt? #MadeInDreams #PS4share #DreamsPS4 #PS5 #conceptart pic.twitter.com/j24QFZuKryJanuary 10, 2020

Based on the images of the v-shaped PS5 devkits that have been doing the rounds, Twitter user Dan K has created the above, rather glorious, concept of the PS5 design in the PS4 exclusive game, Dreams. It's a seriously impressive feat, but seeing as no final design has ever resembled the pre-release devkit, the likelihood of the PS5 looking anything like this is a little far fetched. However, I personally love how space age it is, and would fully embrace a more statement design than a more simple black box.

The Xbox Series X-like one

It's part Xbox Series X, part Sonos speaker, and part Amazon Echo and I LOVE it. Whereas the Xbox Series X is more of a traditional cuboid / obelisk, this takes on a pentagonal column design – which feels like a nice nod to the fifth PlayStation console, but also allows it to accommodate space for a disc drive. It's delicious. Impractical but delicious. Nice work, @xTHAFINESTx.

Fellow tech and gaming site LetsGoDigital has made its own PS5 renders taken straight from the devkit, and the Sony patents. I particularly like the very on brand PlayStation blue detailing within the fans, and the fact the site pays particular attention to the fact the patents never include screw holes, whereas the PS4/PS3 devkit plans did. I'd argue that it's a little gaudy for PlayStation's usually more sleek and understated designs, but I am one to fully embrace a louder PC case full of flashing lights.

The fake startup leak one

A first look at the Sony PlayStation 5. It is on and loading. pic.twitter.com/eE1mM8va4sJanuary 25, 2020

So this account basically @-ed the entire gaming industry (including us) with a clearly fake startup screen for the PS5, but what I'm interested in is the actual console. It's like a hybrid PS3 / PS4, complete with a variation of the glossy line down the middle of the PS4. It's much more square and refined than the PS4 design, and smaller as far as I can tell too. Feels like something that could feasibly exist as the PS5, even if this video is as sketchy as all heck. Although I would argue this console sounds very similar to the whoosh of the fans on my very noisy PS4 Pro.

The super stylish one

Possibly our team favorite to date is this new concept from Twitter user @xTHAFINESTx, which really dials in on the aesthetics of the PS4, but also manages to bring it into line with the sleeker tech of recent years. We're loving the detailing on the sites, allowing air to escape from the sides of the console, and the little lip between the two halves of the console allowing access to the eject button and the like.

The slim LetsGoDigital one

Those cheeky devils over at LetsGoDigital are at it again, this time mocking up what a slimmer version of the PS5 could look like, and much more of an iteration of the the current PS4 design. This one was created in collaboration with the Bonami SpelComputer Museum, and based on the utterly fake prototype leak from Russian tech site Rozetked.

The supercharged PS4 one

Although for this one the controller feels way too off-base, the console itself feels like a supercharged PS4. It takes the grill-like front of the PS4 and PS4 Pro, and then really dials in on it, to produce a console that feels like an evolution of what the current gen's design ethic. This one is from French designer Joseph Dumary, and doesn't feel like too much of a stretch in the console design department.